I have been eating fried green tomatoes every since I was a kid, but never thought of using them in a sandwich. I got the idea from Jeanie over on “Cowgirl’s Country Life” blog. Thanks Jeanie!
I mowed grass today, & we had planned to go over to the “Temple of Tolerance” after supper & listen to some blue grass & old time music. Every Thursday night musicians gather at this rock garden just 3 blocks from us to pick, play, & sing. You can not believe this rock garden, just Google or search YouTube “Temple of Tolerance”. You can drive around the block & never see this giant rock garden is in the center. By the time I was done cooking supper I was too tired, it had been hot & muggy all day, so we skipped the music.
I fried up enough bacon for my wife & me to have a sandwich. Bacon was a fitting first cook on my new Smokin Deck. I wanted to try the green tomatoes on the Traeger but I didn’t want to mess up my first use of them on a sandwich so I did them my usual way. I used to use cracker crumbs, but now my favorite is Panko bread crumbs. Some people like to use cornmeal for the coating. I bought my tomatoes at the grocery; none of my tomatoes were large enough. I picked out two large ones that had some red on them. I think they taste better if they are just starting to ripen. In the photo you will see the top slices are just right, the bottom slices were just a little too ripe, but they tasted good.
I seasoned them with a little Lawry’s seasoned salt, dipped in flour, then in the egg & milk wash, then in the Panko bread crumbs. I fried them in olive oil on med hi heat. I had picked two little squash from my garden & fried them with a little garlic granules & salt. I drizzled olive oil on two onion buns & toasted under the broiler. On the sandwich was some lettuce, a fried green tomato, four slices of bacon, & topped with some Philly cooking cream, savory garlic flavor. My wife tried it on hers too & said it was great. Tomorrow I have a whole rack of spare ribs from my butcher I am going to do Greek style. 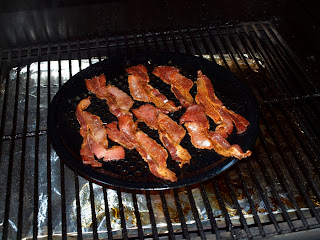 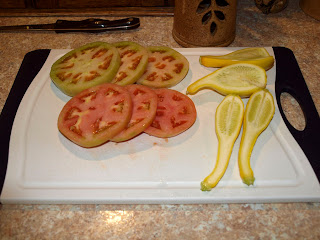 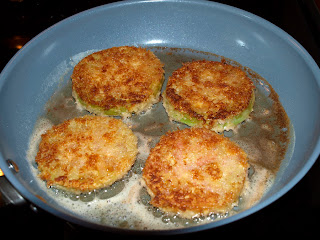 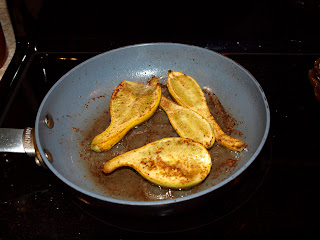 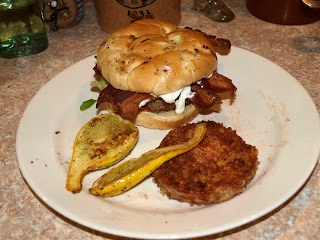