Pastrami From My Carryout

It was a little cool this morning, but the sun came out & was nice all afternoon, getting to 74 deg. Before lunch I smoked a batch of Cajun crackers I had marinated overnight. We planned to go to the rock garden after supper for some enjoyable music, and I would take the Cajun crackers to share. Rain showed up & spoiled that so an evening at home.
After lunch I went to resupply my beer at my carryout & to give the owner a sample of my crackers. To my surprise he had some pastrami he had smoked for me, it was on their daily special. I told him that was a good trade some cheap crackers for some pastrami. He said he had followed a recipe from pelletheads.com to cure & smoke on his new Traeger Texas. I took a taste when I got home, some of the best pastrami I have had in awhile, even better than mine! I had enough to make a sandwich for supper, I just happened to have some good rye bread to use.
My wife fixed herself some leftovers for supper. I had some mashed potatoes & cheesy cauliflower I would have with my pastrami on rye. I fried the pastrami in a little olive oil until edges were crisping up. Placed on the rye bread with some mustard & toasted in the same skillet. Now that sandwich hit the spot! 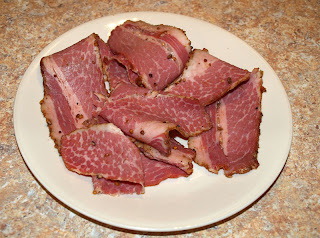 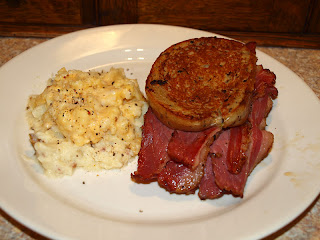 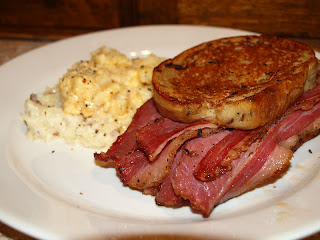