Today was a day to play with the smoker. I have been on a snack kick lately, smoked Cajun crackers, almonds, & pistachios. Love those crackers; and would do the pistachios again. The nuts I did not taste much smoke. I wanted to try some tortilla chips; so I bought a bag of yellow cornmeal tortillas. I fired up the Traeger, placed most of the bag in my wire basket, sprayed with some olive oil spray & a generous amount of CA style coarse grind garlic w/parsley. On the smoker, smoke mode, avg. 175 deg. for one hour. They came out pretty good.
I had a yen for peach cobbler & wanted to try it on the smoker. I do not do many desserts; any of them that calls for dough are out, me & dough just do not seem to get along. I have made pies but use store bought crust. Now cobbler is different, just mix up & layer in a pan. If I used Bisquick I could just drop on for the topping. I found one of Paula Deen’s recipes for Dutch Oven Peach Cobbler that looked good for a guide. One other dessert I make well is a Peaches & Cream Cheese pie, from cooks.com. Since I was experimenting by doing the cobbler on my smoker I thought I might as well combine the recipes some too. I decided to use the vanilla pudding and cream cheese mix in the cobbler. I mixed up the peaches, vanilla pudding & sugar, into a 9 inch square pan, sprayed w/olive oil. I mixed up the cream cheese, sugar, & peach juice, spooned it over the peaches. I followed Paula’s suggestion to pour all the topping ingredients into a plastic bag to mix. This didn’t go well for me, hard to tell when all was mixed good & spooning from the bag was too messy. Might have been better to cut a hole in a corner & squeeze out, but I think I will just use a bowl next time! Onto the smoker I had preheated to 325 deg. on the Treager this is about 350 deg grill temp. Paula’s cobbler recipe said bake for 40 min. so used that as a guide. After 20 min. I rotated the pan 180 deg. Checked again in another 10 min. edges were bubbly & topping starting to brown up. Pulled it in 3 more minutes. Total cook time 33 min. When my wife got home from an auction we both had to try a spoonful, delicious. She said we need some ice cream to have with it so she went to get some Dairy Queen.
My supper would be easy & quick, pulled pork tacos. We had some corn tortillas, & some fresh salsa in the fridge. While at the store getting my corn chips I picked up a pack of McCormicks taco seasoning & a bag of taco seasoned shredded cheese mix. When I got all my stuff out realized I forgot sour cream, also the fresh salsa looked one step from mold so couldn’t use that. My wife ask if I wanted her to go get stuff. I said no I’ll make do. I found a bottle of chili sauce so thought I would use that instead of salsa & just do them without sour cream. I chopped some onion, & green pepper, got that sautéing, added the pulled pork & some taco seasoning, when that was good & hot added some of the chili sauce. I browned up the corn tortillas & served two each. We both thought they were pretty good for thrown together, and were less messy without the sour cream! Besides we had peach cobbler & Dairy Queen to look forward to. It was delicious & I think I did well on the cobbler, worth saving my recipe.
Note: the qrt. jar in the cobbler ingredients is some vanilla sugar I made w/a vanilla bean. I used that in the peach mix & the cream cheese mix. 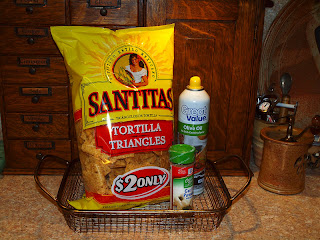 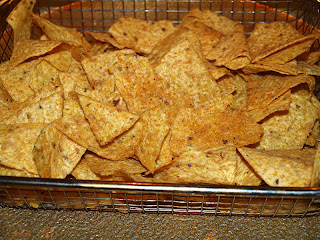 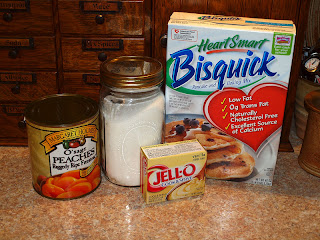 Peach mix in the pan 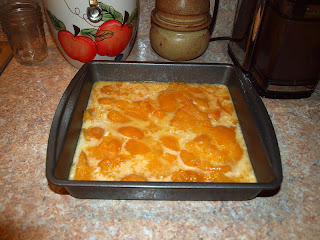 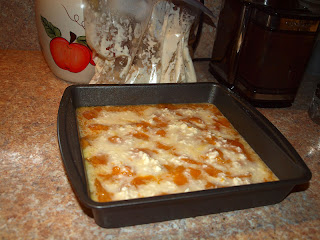 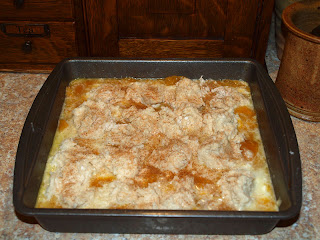 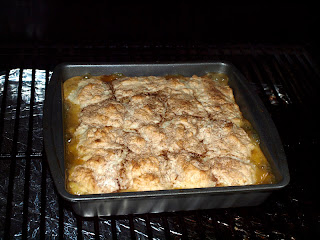 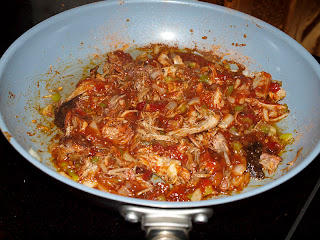 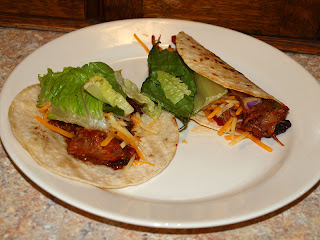 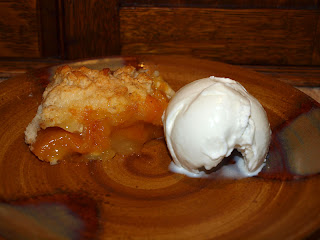 Smokin Don
Posted by Smokin Don at 4:13 AM