Another cook inspired by Jeanie from Cowgirl’s Country Life blog. This has to be the ultimate appetizer, bacon wrapped bacon. It’s Canadian bacon, chunked then wrapped with bacon. Jeanie did hers for 4 hrs. on smoke, but knowing my smoker I decided to smoke for one to two hours on smoke, 170 deg. then go to high to brown up the bacon.
I was going to do these along with my supper, but wanted to do up some for Sandman at Beer & Wine Depot, and some for my butcher at Kah Meats, so I did them for lunch. I made up 20 of them, 5 each of plain. Penzey’s seasoned pepper, Penzey’s Cajun seasoning, & Teriyaki sauce.
I got them on at 11:30, my Traeger held pretty steady at 170 deg. At 1:00 they looked good to go to high & finish up. I checked them after 15 min & looked good so pulled them in another 5 min. They were just a tad over done; I should have pulled them when I first looked at them. They were still mighty tasty & the wife liked them. I delivered some to Sandman & Kah Meats; I hope they liked them. It was hard to see the different seasoning, I liked the pepper ones & it was hard to tell the Teriyaki ones. I think the Teriyaki ones would be good if they were marinated for a few hours & would like to try that. Not the healthiest appetizer but a mighty fine appetizer to treat yourself to once in awhile! 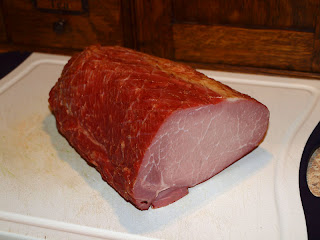 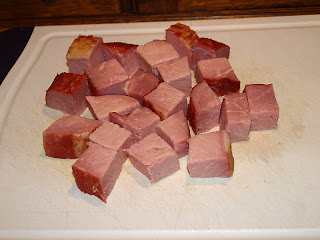 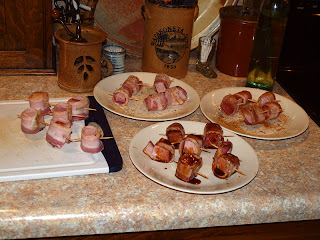 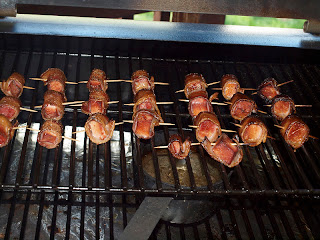 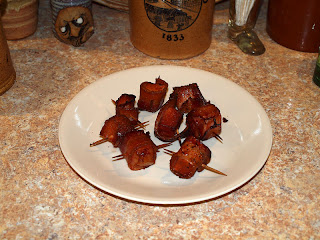 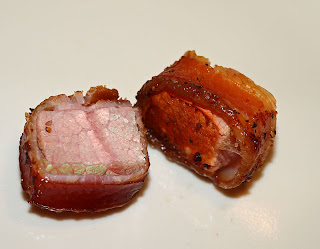