I decided I needed a light on my Smokin Deck. In daylight I found I could use one and with it getting dark earlier it would be nice to have this winter. I went to Lowes & bought what I needed for a receptacle, a switch, & a light fixture. My electrician, that’s me, would install it. I wired in a temporary male plug so I could use it. Next summer I will run some underground to get rid of the extension cord I now use, it is a trip hazard. I started installing it about noon & figured on 2 hours. I keep forgetting I am older now & don’t work as fast as I used to, it took me 4 hours! I cut a 2X4 & fastened between the rafters so I could install the light in the center. When I get time I will dado a piece of wood to cover the wire above the light switch. I was too tired to cook after this so told the wife to get a pizza from Beer & Wine Depot, the best Pizza in town. I will do my cook Thurs.
I had planned on a good supper. I had the last of my tomatoes, (green), and two yellow squash from my garden. I had bought some bacon & bratwurst from my butcher, Kahs, so I would have brat, bacon burgers, fried green tomatoes & squash. Awhile back I ask my butcher if he had any of his Canadian bacon in chunks, he slices & vacuum packs it for sale. He said he would save me a piece the next time he made some. He had it for me today & brought out a whole one & ask how much I wanted. I said about 8 to 10 inches. I plan on doing an appetizer with it & will try some tomorrow. I also bought about 12 inches of pork loin. I will brine it tomorrow overnight & stuff for Fridays cook. A new stuffing I made up so come back to see if it’s any good. 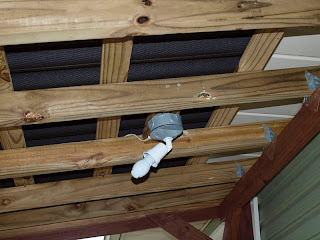 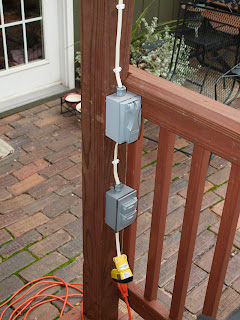 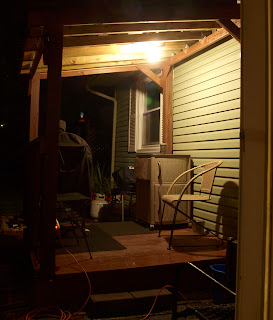 Smokin Don
Posted by Smokin Don at 2:40 AM

Email ThisBlogThis!Share to TwitterShare to FacebookShare to Pinterest
Labels: My Smoke Deck