The other day when I did the bacon wrapped bacon I had a junk of pan pudding from my butcher I wanted to throw on too but forgot. I have never tried it smoked, usually pan fry crisp & have with eggs for breakfast. It is pretty soft & hard to handle without falling apart. I just wanted to try it smoked so today I went back to Kah’s & bought some of his ring bologna. I didn’t want to smoke the pan pudding all by it’s self. I put both on the Traeger, smoke mode running about 180 deg. & just over an hour, it was looking good so upped to 225 deg. until I got both up to 150 deg IT; about an hour & a half. I let it cool for 15 min. then tried some of the pan pudding with crackers. I garontee you that was good, mighty tasty. I think I like it better smoked than fried. I might try some of the smoked fried for breakfast tomorrow. I have a couple of hours to relax now then I have to start on the stuffed pork loin for supper, it has been in brine overnight. 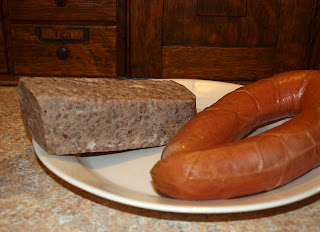 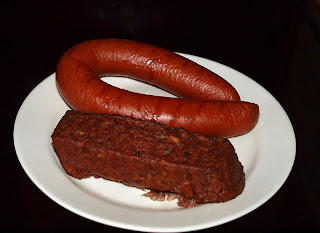 Close up of Pan Pudding 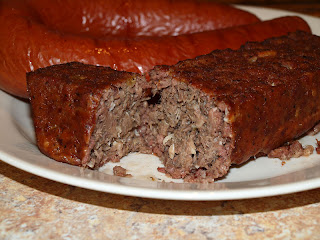