Smoking & pulling the 17 lbs. of pork yesterday, made a mess in my kitchen. I won’t be doing that again while the wife is gone, I had to clean it all up!
Today, Sundays cook would be pork & kraut with noodles and mashed potatoes. This is one of my favorite meals. I had ¾ lb of kraut left I needed to use, some rib trimmings & flap meat and 3 fresh brats. My wife usually makes drop noodles to add. Since she was not home I had some Waltz Meat Amish style noodles to use. These are actually made by a bakery in Van Wert, OH & sold to Waltz to sell with his canned beef & chicken. These noodles are better than any I can make. I planned to smoke the rib trimmings for 3 hrs. & the brats for 2 hrs. at 175 deg, smoke mode. It was a little cool this morning but by noon had warmed up & the sun was out some in the afternoon. I seasoned up the rib trimmings, with salt & pepper and got them on the smoker at 10:30. At 11:30 I flipped the rib meat & added the brats. All were done at 1:30, I had upped the heat to 250 deg the last 40 min to render out some of the fat. I took the meat inside, sliced the brats in half, sliced up the flap meat & got what meat I could from the bones. All into a foil roaster pan, topped with the un-rinsed sauerkraut, a little salt & pepper, half bottle of Guinness Stout, and water to cover. Back on the smoker at 250 deg to slow cook, uncovered all afternoon. I would cook the noodles to add the last hour, and make some mashed potatoes. It was a nice afternoon, I should have mowed grass, looked like an all night rain coming our way. It was more fun to sit there watching the smoker & birds. I got my camera out & tried for some hummingbird shots, no luck but did get a couple of good ones of a Monarch on my butterfly bush. I will show one here. At 3:30 I went inside, boiled my noodles 15 min, drained & added to the pork & kraut. At this time I realized I never added any onions & garlic, so sliced a small onion to add & some dried minced garlic. My Dad always said you can’t cook without onions & garlic! My wife had called & said they were getting a late start home & it would be after 6:00. I told her supper would be ready. At 5:00 I put pealed & cut up the potatoes, got them on to boil for 15 min. I preheated my oven to 210 deg. brought the pork & kraut in, covered with foil and in the oven to hold. When the potatoes were done I saved some of the water, drained, added 5 pats of butter to the pan. Added the potatoes and mashed with a hand masher. When they were mashed good I added a little of the potato water & whipped some with a spoon. I like my potatoes on the heavier side, not light & fluffy. I covered the pan with foil & in the oven. My wife arrived home at 6:15; after she got settled down I dished us up some mashed potatoes, covered with pork & kraut. I had some seeded rye bread to have with it. We got our trays out & went to the living room to eat. Before turning the TV on my wife told me all about her week-end trip. We both enjoyed the meal, I was happy that she enjoyed her little trip and I got to stay home!
I didn’t get my pulled pork vacuum packed; I’ll do that in the morning. I did get some to two of my neighbors. 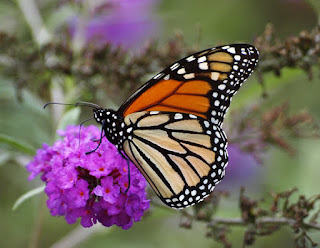 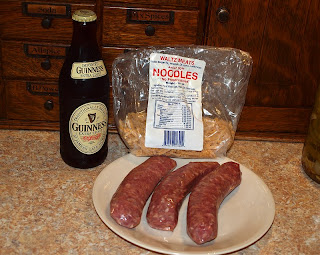 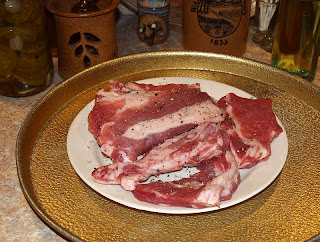 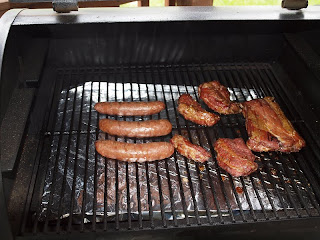 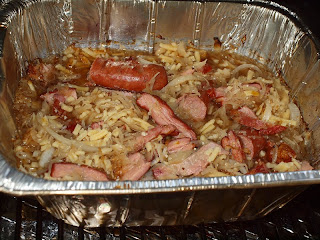 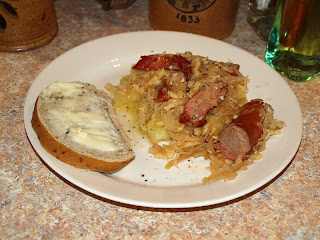 Smokin Don
Posted by Smokin Don at 2:26 AM