I wished too hard for the hot humid weather to be over. Last Sat. it was 95 & humid. Monday it was just about 60 deg. all day. Today, Wed., it was misty rain & windy all day & only about 58 deg. I got to check out using my covered deck in the rain for the first time. Even though occasional wind gusts blew some rain in around the edges me & the smoker stayed dry & the cook went well. I made some chili before using smoked meat but this version I would smoke the beans too. I got the idea from Jeanie at “Cowgirl’s Country Life” blog. She got the idea from Heybud, so thanks Jeanie & Heybud!

I got the meat & beans on the smoker at 12:30, smoking at an average 180 deg. My wife recently entered a big sister program. She was paired up with a ten year old girl, after meeting the girl & her family a few days ago, tonight would be their first outing. She is supposed to have contact with her 2 or 3 times a month. They had planned on going to the rock garden & then out to eat. With the rainy weather she ask if the chili would be done, I said yes so they stayed here & we all had chili & cornbread. I left out the smoked paprika in the recipe to see if the smoked beans added any smoke flavor & kept it mild for our young guest. After getting the chili started on the stove, I mixed up a batch of Miracle Maize country style cornbread & did it in a cast iron skillet on the smoker at 375 deg. for 25 min. It came out good, maybe just a tad too brown on the bottom. I had used Miracle Maize’s sweet mix before & we liked it. The country style is a little courser than the sweet, more southern style. My wife & young guest didn’t like it as well as I did. I served the chili with shredded cheddar on top. The young girl was a delight & nice to have around, I think she enjoyed it too. She liked my chili; at least she ate it all! My wife & she played some card games after supper, before taking her back home. 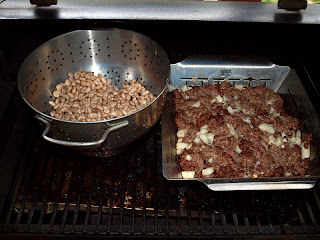 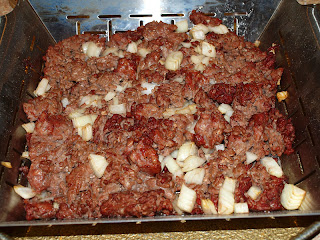 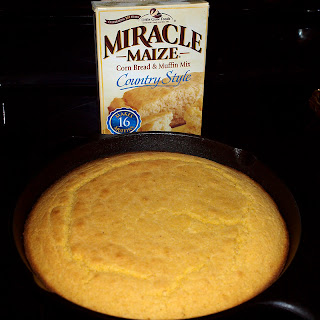 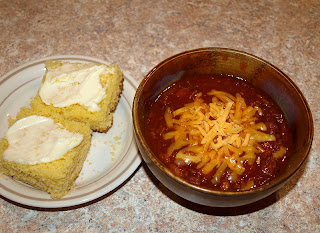 Leftover chili tonight & tried Jeanie's, Cowgirl's Country Life blog, Kartoffelknodel's boiled tater balls, in the chili. I thought my tater balls were a little fragile, need to work on the recipe. I used leftover garlic chive potatoes. Here is my chili with shredded cheddar and a tater ball. 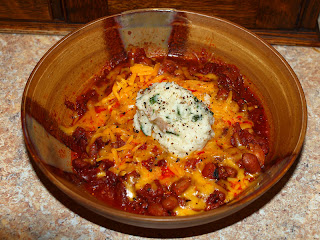 Smokin Don
Posted by Smokin Don at 4:07 AM