I am tired out now after 4 cooks in two days. Yesterday for lunch I did bacon wrapped bacon appetizers and Brat burgers & fried green tomatoes for supper. Today I did pan pudding & ring bologna for lunch and stuffed pork loin & fingerling potatoes for supper.
I had not done a pork loin for awhile & wanted to try one stuffed. I looked at a lot of recipes for stuffed loins & nothing looked good to me. I thought that sauerkraut goes good with pork & what else would I add to it; bacon, onions, & garlic, a granny Smith apple and a couple cloves of garlic. I had brined the loin overnight. After I was done with my lunch smoke I relaxed for awhile, got my birds fed & watered. I took the loin from the brine, rinsed & dried. I seasoned it on both sides with a little coarse salt & fresh ground pepper; then back in the fridge to dry an hour or two. I had read up on how to stuff a loin. Most recommended closing the ends & tying it up. I had a large needle that would work for sewing up the ends. I browned up the bacon, about 4 slices diced up, added a small onion chopped, & two large cloves of garlic sliced thin. I did that up early & let cool before mixing with the kraut & apples. When it was time to do up the loin I put a cutting board on a large cookie sheet. I used a boning knife, keeping level & centered and went as deep as I could from one end. I sliced sideways some then inserted a wooden spoon handle. I took the boning knife & went in from the other end until I met the spoon handle then worked the knife sideways some. I used the wooden spoon & tried to enlarge the whole from both ends. I had mixed up the cooled bacon & onions with chopped apple and kraut. I stuffed from one end using my fingers & the spoon then repeated from the other end. I got most of the stuffing, about 2 to 3 cups stuffed in the loin. I didn’t take any photos of the stuffing process since it wasn’t pretty! Most was in the loin but had some on the cutting board & in the cookie sheet, some on the countertop, some on the floor, & some on my hands! I took my needle & cooking twine and sewed both ends shut then tied it all up, back in the fridge until smoke time! I let the wife clean up the mess. She is my Sous chef, but so far I don’t let her do much of the cooking, just some prep and all the clean up, well almost all!
The last loin I did I seared it on high for 15 min. then went to 225 until I got 150 deg IT. I would do the same with this one. When I got the Traeger above 400 deg I added the loin fat side up, it was 4:12. I would go fat side down after the sear. The smoker was at 430 deg when the 15 min was up; I turned it & had some nice grill marks on it. I went to 225 deg. & inserted two temp probes. It was having trouble coming down to 225 deg so I helped it along by opening the lid every once in awhile. This was probably due to the 5 fire bricks I have in it, the ambient temp was 60 deg. At some point I added some fingerling potatoes, drizzled with olive oil, a little coarse salt, & Italian seasoning mix. The potatoes were red, white, & purple. I think they were on about 45 min. When the loin got to 135 deg I put on some fresh green beans in water, some onion, real bacon bits, a little balsamic vinegar, salt & pepper. At about 6:00 one probe was reading 150 & one was 138, I think it is reading about 10 deg low. I checked with my analog pocket probe & had 145 to 150 from one end to the other so I pulled it took inside & tented with foil to rest for 15 min. before slicing. A lot of people say to pull loins at 140 deg but I am old school & find it hard to pull any pork until it reaches 150 deg. I served it with the potatoes, green beans, and some bread & butter. My wife & I both loved it; the pork was moist & almost melt in your mouth. I would have liked more stuffing, the next time I will try to widen the slot more with the boning knife. A reverse sear might work better for a Traeger with fire bricks, but I am usually too busy at the end of the cook trying to bring everything else together. Besides this worked well for me, I am retired & have the time to sit there, open & close the lid to bring the temp down so I don’t cook it too fast. 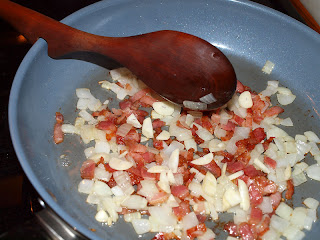 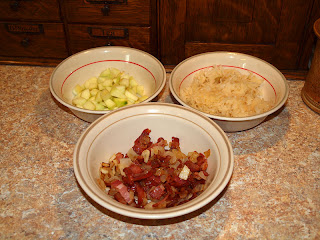 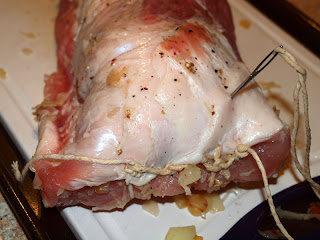 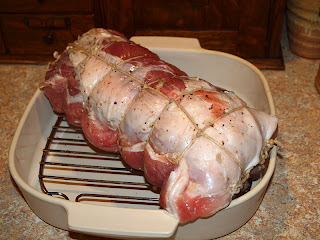 After the sear fat side up 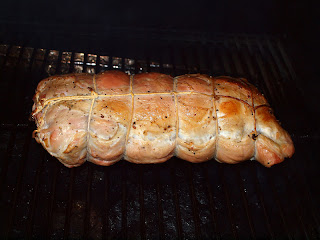 After sear fat side down redy to finish 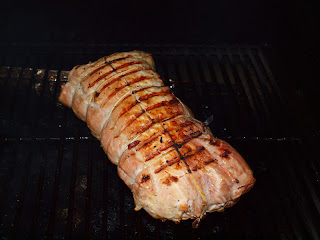 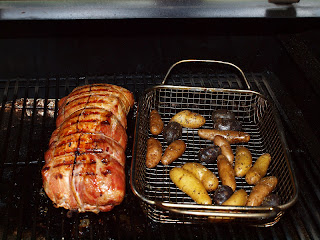 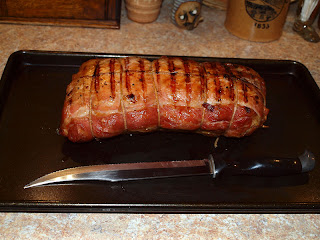 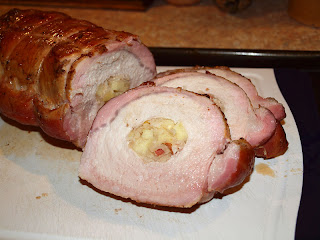 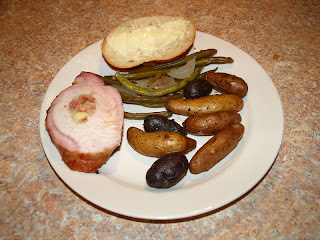