My wish for the last hot humid day did not come true, today it was again 95 deg & humid. It sure makes you tired. I bought chicken breast & bacon the other day & was going to make lemon pepper chicken wrapped in bacon. I wanted to do them on smoke mode for awhile so would need the bacon to keep them moist. After a couple of my friends on the pellethead forum did up some stuffed peppers it had made me hungry for them. I would stuff them with rice & veggies since I was pairing them with the chicken. I had a couple of small yellow squash from my garden to use, some Vidalia onions, & about ¾ tub of Krafts Philly cooking sauce, savory Italian & sounded good to mix with some Zatarain’s New Orleans Yellow Rice. Some tomato sauce for on top & shaved parmesan to add at the end.
I suppose you could just use any lemon pepper seasoning for the chicken; but if you want a great taste you will need some Penzey’s Florida seasoned pepper. It is Hand-mixed from: Tellicherry black pepper, lemon peel, orange peel, citric acid, garlic and onion.
After the wife & I attended a surprise 75th birthday party for a widow friend of ours I got my chicken marinating in the lemon juice, fixed my rice, grabbed a cold one & sat out in the heat to relax awhile! I prepared & stuffed my peppers & back in the fridge ready to cook. At 5:00 I fired up my Traeger & went in to prepare the chicken, I removed it from the marinade & dried, seasoned both sides with Penzey’s Florida seasoned pepper. My bacon did not want to wrap well so I placed a slice under & one on top of each chicken breast then secured with silicone elastic bands. I put the chicken & peppers on at 5:30 on smoke mode, 180 deg for 45 min. Then I went to 300 deg & took another half hour to get the chicken to 168 deg IT. I added some shaved parmesan on top of the peppers the last 15 min.
The chicken was great, just a touch of smoke & pretty moist. My wife liked the stuffing but not the peppers. I guess that figures, she likes pie too but not the crust! 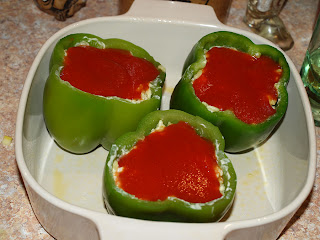 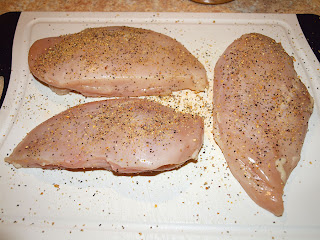 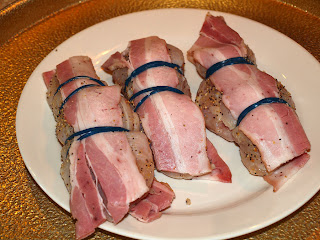 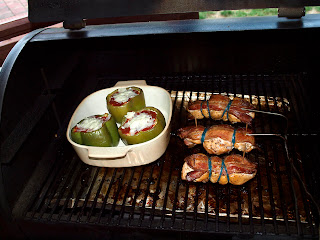 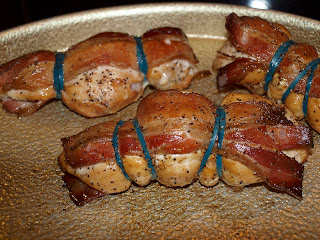 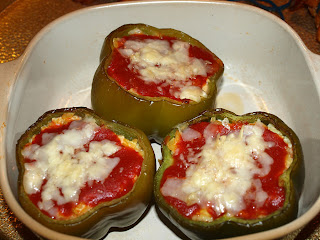 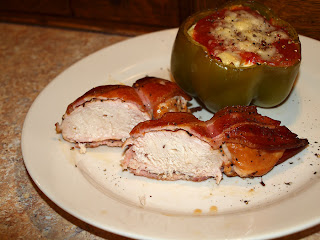 My Plate
Note I added some BAM! to the plate 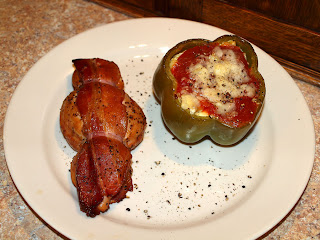 Smokin Don
Posted by Smokin Don at 1:38 AM