I got up early this morning, 7 AM, my pork butts had been on smoking since 1 AM. My wife was up getting ready for an overnight trip with a friend. They were going to Dover, OH & see two ladies my wife had worked with in D.C. yrs ago. I had been up at 4 AM & checked the smoker; it was doing fine running about 180 deg. The two pork butts weighed 17.6 lbs. & were about the same size so I had figured on smoking for 8 hrs. before upping the temp. I had wet them down with some Carolina vinegar sauce & rubbed with Bone Suckin Sauce rub.
For my lunch today I had a slice of toasted rye bread, with a slice of the smoked grits I did yesterday & an egg on top. That was delicious.
I did both butts fat side down; I think this method keeps more of the juices in the meat. At 8:15 I inserted a temp probe in both butts. I was surprised the one on the right, hottest side, was up to 158 deg. IT already, the other one was about 15 deg. cooler. At 9:00 they had been on smoke for 8 hrs. so I upped the smoker to 225 deg. At 11:00 the one was at 170 deg. IT so I wrapped it in foil, adding a half cup of the Carolina vinegar sauce. Having one finish later suited me, since I could not be pulling both. At 12:00 the other one was up to 170 deg. IT so foiled it too with a half cup of the sauce. I upped the temp to 250 deg. At 1:00 the one was at 205 deg. IT so pulled it & placed in a preheated 200 deg oven, turned the oven off. I had moved the one to the right to finish & it was at 205 deg. at 1:30 so placed it in the oven. I had them on hold for one hour then started to pull the one. The bone came out clean and this one pulled nice, even the strands of meat were easy to break & shorten up. It was very moist too. The second one seemed a little dryer, but that could have been the longer cook time before foiling, or just the difference in the two butts. It pulled pretty good, I have been puling by hand lately, it is about as easy as using two forks & I can get the size I want. I had placed them both in a large foil pan for holding in the oven & wanted to save the liquid. With each one I opened the foil & poured what liquid I could get into the pan, then lifted out foil & all onto a try this way all of the fat stayed in the bottom of the foil to discard. I poured the liquid into a gravy separator to get rid of the fat. I covered the pulled pork with saran wrap & in the fridge for overnight. Tomorrow I will add the liquid, mix some a vacuum pack, & freeze. I will give some to a couple of neighbors & most of the rest I will give to my oldest daughter & husband. I saved out enough for a sandwich for supper tonight. This is the most meat I have done at one time, at least pound wise; it went pretty well.
I thought my garden was done but found a couple of yellow squash, so I sliced up one, sautéed in olive oil with some Panzey’s sandwich sprinkle. I had this with a pulled pork sandwich, mustard, on a cheap ole white bun. Yea mustard, no slaw or BBQ sauce, I love mustard on pork so use it on pulled pork sometimes. A good supper!

My Method for Pulled Pork 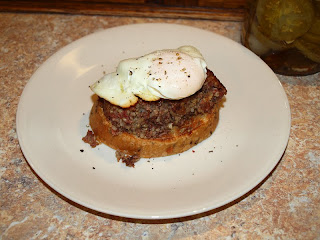 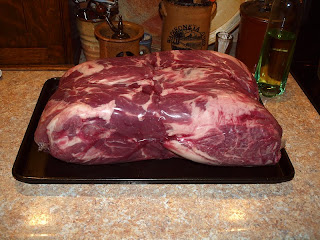 After 8 hrs. of smoke 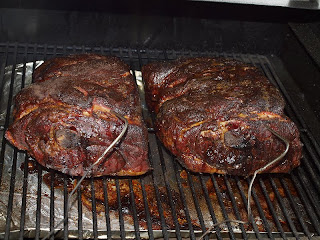 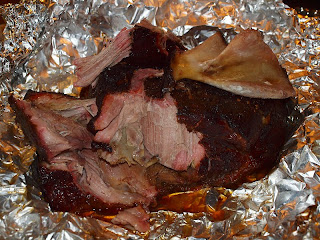 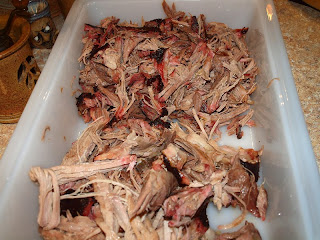 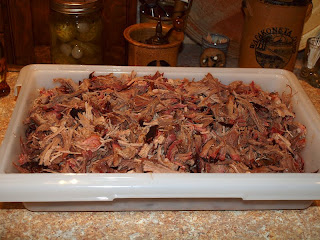 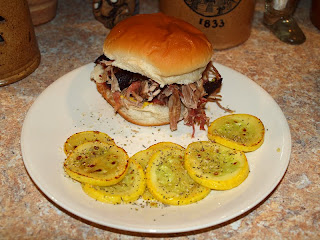