Time to make a batch of Kimchi and this time I finally added some shredded Daikon Radish. I remembered that fellow LTBBQ forum member TenPoint5 had used my recipe but added some Daikon radish and raved about it.

I found some Napa cabbage; 3 heads a little over 2 pounds each and a bunch of organic Daikon radishes. Usually the Daikons I find in the grocery are large; about 2 inches diameter. These were about 1 inch about like a large carrot. I shredded up one and had a half cup so I added that along with a half cup of shredded carrot, some sliced green onions and 4 cloves of minced garlic. Most recipes call for some ginger too but I don’t like it in mine.

Thursday after I got some soup in the Crockpot I cut up the cabbage and got it salted down for a half hour; stirring twice. I start with a large Tupper ware bowl; about twice as large as the one I let it ferment in. After salting and then rinsing well it reduces in bulk more than half. I added the ingredients and a heaping half cup of the Korean red pepper flakes, mixed well and it would set for two days at room temperature to ferment. I stirred it a couple times over that time. My recipe said to let ferment one or two days and I like two days better.

Today I placed it in clean quart jars. I only got two quarts from this batch. It will go in the fridge and I will loosen the lids for 4 or 5 days to burp the jars since it continues to ferment. I like to let it set at least a week before using and I think the longer it sets the better it gets. It will keep at least 4 months in the fridge. I especially like it on a pulled pork or brat sandwich or just plain as a side.

Cutting up the cabbage 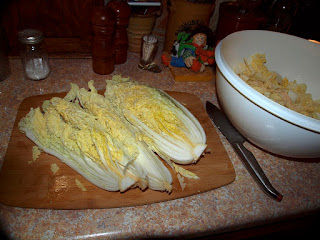 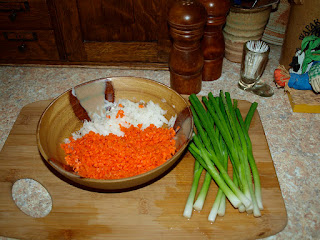 All in the bowl 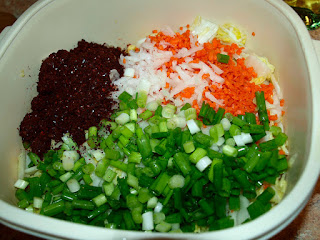 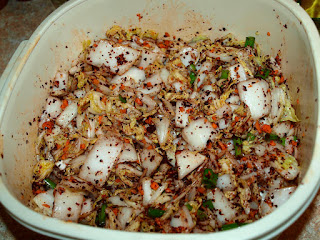 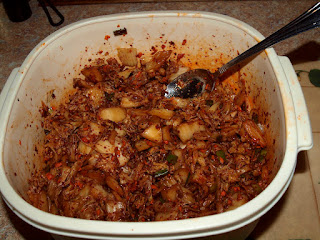 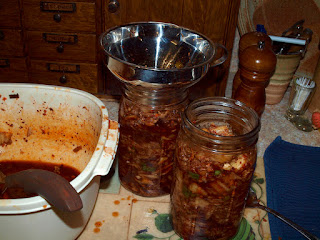 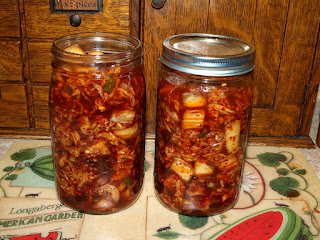