It was a wet, windy, cold fall day here today. I was glad I wanted to do this cook inside. I was out to my butchers the other day and he had some nice strip steaks on special for $8.69 each. I picked out two that was almost an inch thick. The two weighed right at 2 pounds.

I have not had strip steaks in ages. I find them a little on the tough side unless you get good ones and prefer rib eyes. I wanted to do them in cast iron but the steaks were too large for my 10 inch skillet so used my 12 inch Lodge carbon steel.

I have been reading a lot lately on dry brining, marinating, with salt and must say I like the method. I was adding a little coarse salt to both sides and letting set on a rack in the fridge for an hour. I am kind of in agreement with a couple of cooks that say you just need to get them out just long enough to salt and let them set for 20 minutes. That is just long enough to draw some water out to help in the browning process. I don’t rinse the salt off like some do. I don’t use heavy salt seasoning and don’t find them too salty.

I had about 3 cups of leftover mashed potatoes from Bob Evans that needed used. I mixed in an egg, about a cup of shredded cheddar and about 2 tablespoons of fresh snipped chives from my garden. I divided them between 4 muffin pan wholes; topped with some more cheese and chives and added some bacon butter to two of them.  They went into the oven at 370 deg. for 35 to 40 minutes. My other side was some peas.

I had some Weber’s Chicago steak seasoning to use; for mine I mixed in a teaspoon of Folger’s Gourmet Supreme dark roast coffee to 2 teaspoons of the seasoning. I was not going to add the seasoning until near the end of the cook to keep from burning it.

When I got the potatoes in the oven I got the steaks out and salted both sides with some gray sea salt. I heated my lodge CS skillet on medium high, just one notch above medium, for 8 minutes. I then added 2 teaspoons of grape seed oil; enough to just coat the pan.

I removed the steaks to plates and topped with a pat of bacon butter. I got the potatoes out of the oven and had the peas cooking in the microwave. I served the wife and me along with some bread and butter.

The wife and I both thought the steaks were tender, juicy and just right med. rare. They were without a doubt the best strip steaks I ever cooked. We loved the potatoes in the muffin pan; that will be my go to method for leftover mashed potatoes. We like potato patties but these are a no fuss way while you tend to other cooking.

I am not sure I could really taste the coffee in my seasoning or not but it was good. 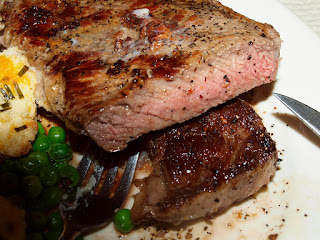 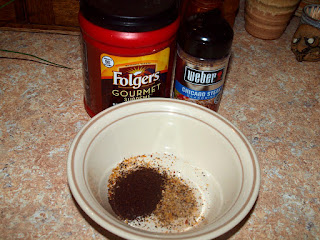 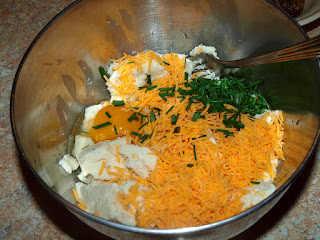 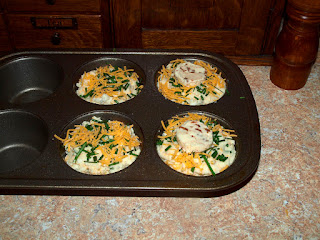 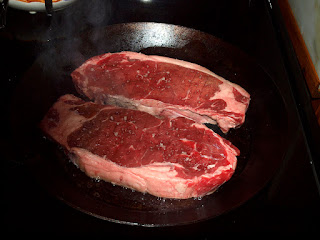 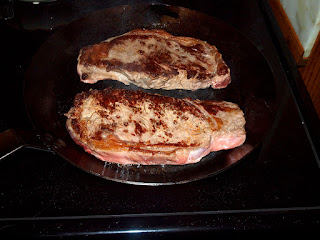 Seasoning added to the first side 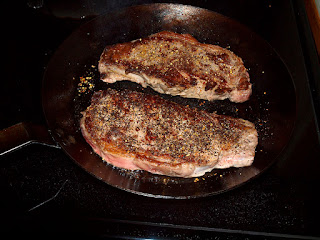 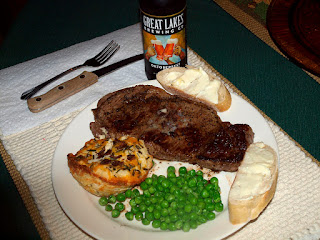 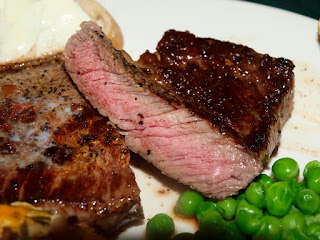