Yesterday was a warm 72 and windy; it was overcast most of the day and rained at suppertime. My huge locust tree is losing its leaves and when it rains I track them in; the wife has a fit! Today I don’t think it ever hit 60 deg. and I was cold!

My wife was off to church this AM and out for lunch. Her and a friend went out for supper and then to see a singing group at the civic center in Lima. When the boss is away what does the cook fix? Just about anything he wants!

I had some jowl bacon to use up and had brat patties from my butcher thawed out. They would marry well! After lunch I sprinkled the bacon with some Super Pig and did on my Traeger and had it ready. I. I cut some of the garlic loaf to use and toasted it on the grill.

About 5:00 I was hungry so got all ready. I sliced some tomato and got out a slice of American cheese and the mustard. I heated the Weber Spirit on med. and would do them flat top style and a little like an in out burger. I used a little olive oil spray and did the patties for 5 minutes, added a little mustard and flipped. After 4 minutes I added a slice of cheese to one patty and topped with two slices of jowl bacon.
In two minutes the cheese was melted.

Somewhere in there I toasted the bread and added a little mustard then added the cheese bacon patty and then the other patty. I took it inside and added a couple slices of tomato and some potato chips.
I had some corn tomato gratin as a side.

Now that was a brat bacon burger! It was almost too much for me to eat but I managed! 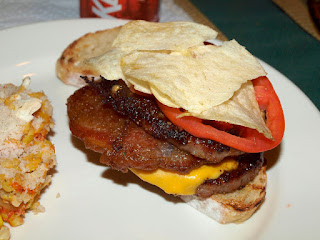 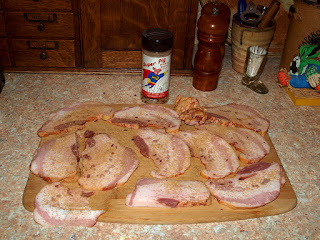 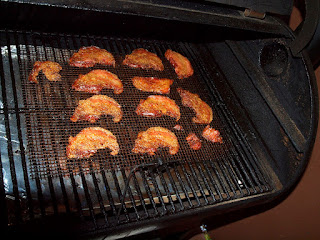 One side done and mustard added 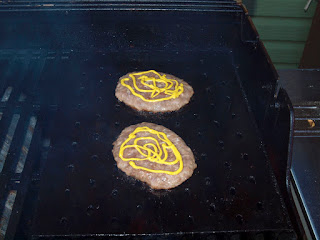 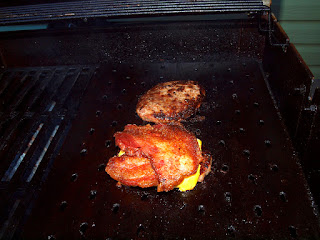 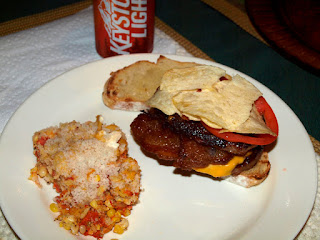 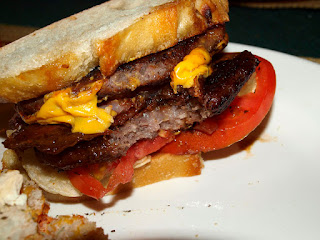