Use Up some Stuff Soup w/Cheesy Pull Bread

Oct 29 2015
Tonight was our night for trick or treaters to come around so I wanted something easy for supper. I had seen this idea from the Pioneer Woman to use up stuff from the pantry by mixing 7 cans for some soup. I had some cooked beef and two ground chuck burgers. I had forgotten to vacuum seal the burgers so thought I better use it for the soup too. I had 5 cans of veggies and some beef bouillon granules.

My wife has dressed up and set out front to hand out candy for about 30 years now. She has had many different costumes and this year needed something warm. It was about 40 deg. and windy. She said she was a baby this year wearing a one piece flannel pajama set and had her bottle with nipple. The daughter in law and grandson was coming for supper. The grandson said he would help hand out candy.

After lunch I chopped up the beef and added to the Crockpot with a quart of water and two rounded teaspoons of beef granules. I browned the burgers and broke up then added some chopped onion, salt and pepper to it. I deglazed the skillet and added it in too. I added in some spaetzel I had left. I then drained and added a can of cut green beans, a can of hominy, a can of corn, and a can of cannellini beans. I added an undrained can of fire roasted tomatoes.  I set the Crockpot on high for an hour then went to low.

I went to Krogers in the AM to get some Napa cabbage for kimchi and got a country style sourdough loaf to make some cheesy pull bread to go with the soup. I stopped at a Country store where I buy butter and a lot of good Troyer products. They just happened to have a Troyer black raspberry pie and I got one for our dessert along with some Edy’s vanilla bean ice cream.

I checked the soup at 4:00 and added some salt and a little more water. I had to feed the wife before 6:00 when the trick or treaters start coming. I sliced the bread in 1 inch squares and added some sliced sharp white cheddar in the slits then poured a half stick of melted butter over. I wrapped it in foil and placed in a preheated 400 deg. oven for 15 minutes then folded the foil down and added some Seargento’s 4 state shredded cheddar to the top and back in the oven for another 10 minutes.

I just got the wife and my soup served and the DIL and grandson came. They both had some soup and bread too. The soup had good flavor. The grandson had decided to do some trick or treating with a couple of friends so went for 45 minutes then came back to help hand out candy. The cold cut back on the number of kids this year, most years we will have over 200 but I doubt if it was half that this year.

We all had some of the black raspberry pie and ice cream for dessert. To me it’s the best pie ever and kinda hard to find anymore. All in all we had fun tonight and with the leftover chicken and rice from last night and the soup I should not have to cook all week-end!

Stuff for the soup 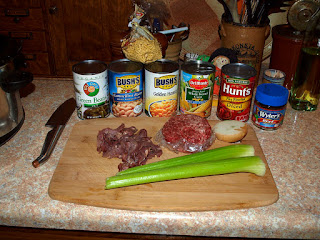 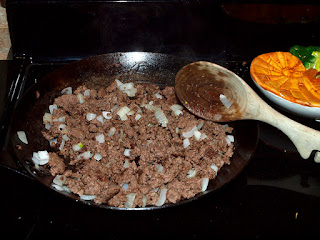 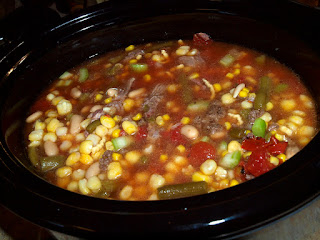 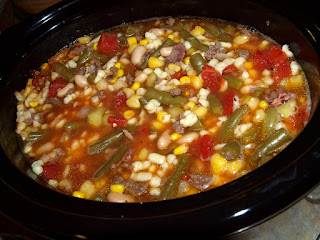 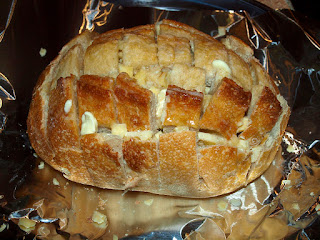 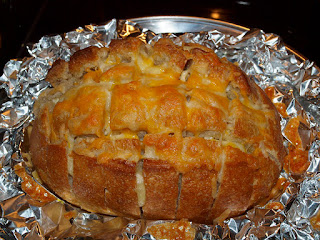 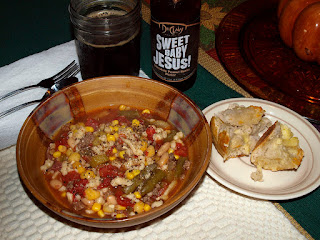 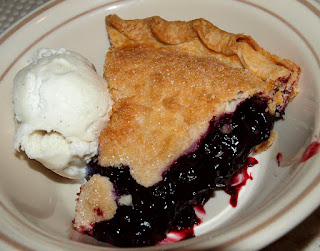