It was only about 50 deg. today, 55 tomorrow but back to the 60’s next week. We will have frost in the AM. I am not used to the colder weather yet. I didn’t have much planned to cook for the week-end. Besides the Grandson has soccer tournament all week-end and the wife went to one game today. Tomorrow she is going with a friend to an afternoon play and then out to eat after. So it’s just me and the dog this week-end!

My wife went for her normal hair appointment at 11:30 and then was off to the soccer game. I had most of the ham left I did yesterday so I got my slicer out to slice, vacuum seal and freeze. I cut it in half and sliced 4 slices from the best half for tonight supper and a sandwich or two. I sliced the rest thin and divided into half pound bags. I ended up with 5 half pound bags and a ¾ pound bag for the wife to make some ham salad from. I think I ate a half pound while slicing!

Knowing a frost was coming for the week-end I salvaged what tomatoes I could from my garden Thursday. I had six and figured on having fried green tomatoes. I had just bought some stone ground white and yellow grits so a natural for tonight’s supper was some ham, fried tomatoes, grits and a cheese sauce.

I picked a green, a red and a yellow tomato to fry and got two nice slices from each. I battered the tomatoes early dipping in flour, then an egg thinned with beer and beaten and then in cracker crumbs. They went in the fridge to set up.

My wife met a friend she had lived with and both were secretaries at WPAFB, Dayton, Ohio after the soccer game was over at 3:00 for a late lunch. She said she would call when headed home. I had everything ready when she called at 5:00 and would be here at 6:00 or a little later.

I made my cheese sauce using a can of Campbell’s cheddar cheese, some beer to thin, a teaspoon each of Penzey’s Cajun seasoning and sandwich sprinkle, a heaping teaspoon of yellow mustard and a tablespoon of Worcestershire sauce.

I started cooking my white grits at 5:50, ¾ cup grits, 2 cups water, a little half and half, half stick of butter and salt. I had my 12 inch CS Lodge skillet on warm with bottom coated with extra light olive oil and a Tbs. of butter.

When the wife got here the grits were about right, nice and thick. I heated up my skillet and fried the tomatoes. She said she was still too full from a late lunch and just wanted the grits, tomatoes and cheese sauce. So I served her some grits with the fried green, red and yellow tomato on top covered with cheese sauce. I nuked a slice of ham and made up my grits and tomatoes.

That was sure good; the ham was delicious fork tender and I liked the grits and tomatoes. The cheese sauce was pretty good for quick and easy.

Slicing up the ham 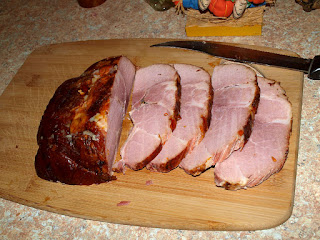 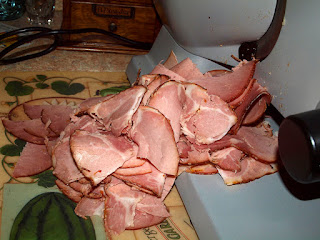 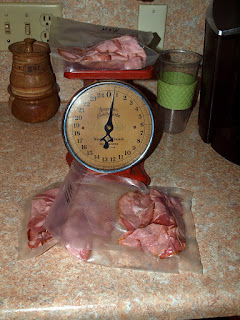 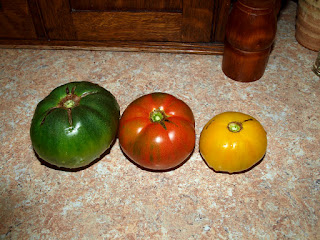 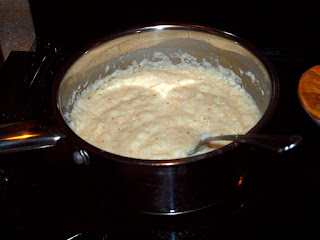 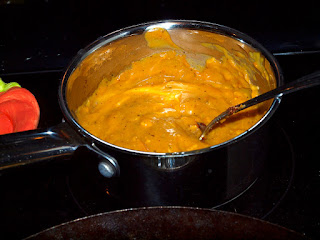 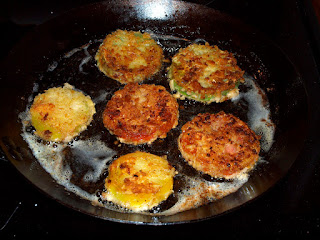 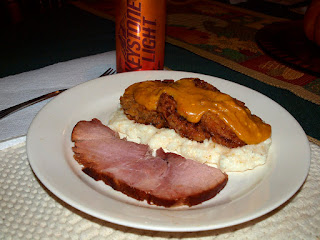