I have a neighbor I see always working in his garden in the summer. He has a green thumb and tries planting about anything. The other day he was riding a new riding mower so I went over to see it. He showed me his crooked trees, he had three started along the side about 2 foot high and two taller ones out front. He said he starts them in water.

He said he was making canes and showed me three he had taken the bark off and was drying them. He said pick you out one if you want it. I need a cane most of the time now. I said you pick out one; and he handed me the one I really wanted. It was just about the right height for me and had a natural bend for a handle.

It was a white wood without any grain. I thought about taking the top layer off but when I cut down the end for the crutch tip it was the same looking wood under the first layer. I stained it with a dark walnut but it did not take the stain well and I did three coats on it. It did not take me long to cut it down for the tip; I used my pocket knife and a wood file.

I gave it two coats of all-weather polyurethane semi-gloss spray paint. This will be my Sunday cane! 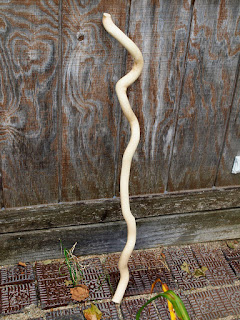 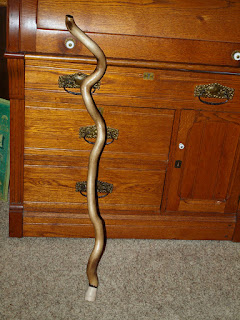