I had bought some Camellia brand baby green Lima beans and I was hungry for some comforting beans. They would taste good, it was cool all day and it looks like frost tonight. Whenever I cook some beans I usually check out Deep South Dish blog spot. My friend Mary knows her beans! She cooks up some fine southern dishes. Our bean recipes are usually pretty close, she always adds some Cajun seasoning to most dishes and I have started doing that too. I followed her recipe pretty close for the baby lima beans.

I ran out of Cajun seasoning so I used some Blues Hog rub that worked well. I omitted the pickled jalapenos and I added a tablespoon of Cholula hot sauce.

I had some jowl bacon and a half a smoked boneless ham, 5.5 pounds from Kah Meats. Their hams are about as close as you can get to old fashioned. I got up early this AM and rubbed a thin coat of molasses on the ham. It took about 2 ½ hours at 315 deg. grill level to get it to 130 deg. IT. After it cooled some I cut a thick slice from the end to get the nice crust flavor in the beans. I had added 5 slices of the jowl bacon when doing the ham that was done in an hour. I took it up to my friend at Beer & Wine Depot to try.

I double wrapped the leftover ham and it went in the fridge. I will slice some up tomorrow and use some for the wife to make ham salad.

I had about 2 cups each of the diced jowl bacon and ham for the beans I had soaked overnight. I got the bacon in my CI Dutch oven and browned it pretty well. I added the ham but it didn’t need browned so I added the chopped onions and some diced red and yellow peppers I had. When the onions were getting soft I added the garlic and stirred it in. I added the Blues Hog rub and stirred in then deglazed with a
splash of beer.

I added in the beans I had rinsed and water to cover a teaspoon of kosher salt and some fresh ground pepper. I brought it to a boil then simmered about 10 minutes. Then all went into A Crockpot and set on high. It was 12:30 and they would be nice and done by 6:00 supper time.

Beans for me calls for some corn bread so I fixed my favorite Miracle Maize Sweet mix in my CI skillet. I added in about a cup and a half of ground pork cracklins and a small can of mild green chilies.

My wife did not want my beans so she had some of the chicken Sandman did on his KBQ and some mac n cheese. She does like corn bread and had some of that; she said she liked the chicken! I had a large bowl of the beans and some cornbread with a little butter! That tasted great; it had good flavor with a little heat and the bacon and ham was good in it! I could hardly taste the cracklins in the corn bread; I would rather add some crumbled bacon. 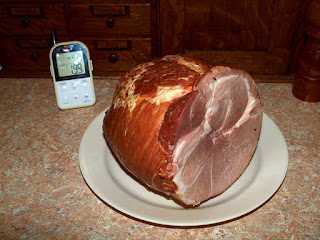 Coated with molasses and on the smoker 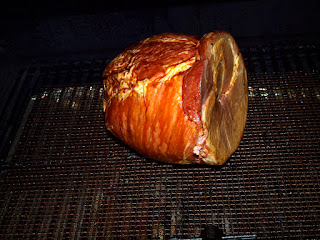 Bacon samples for my friend are done 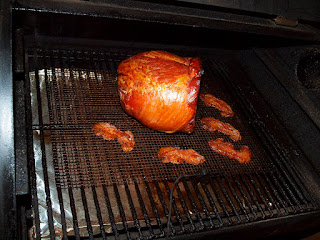 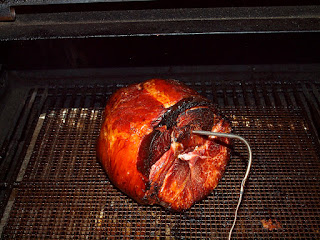 Ham diced for the beans 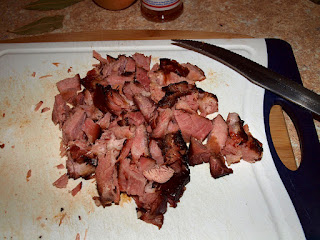 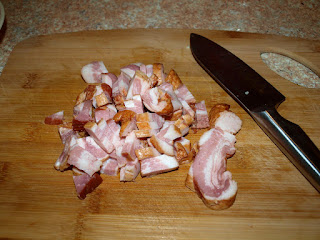 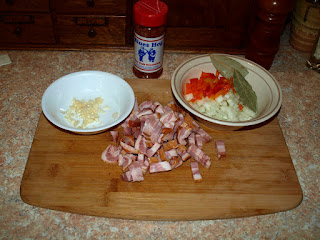 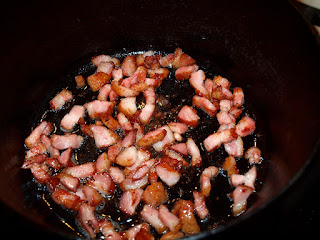 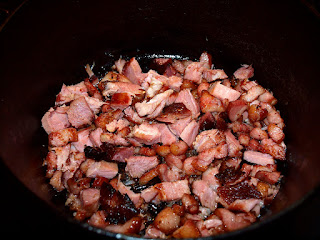 Onions and peppers in 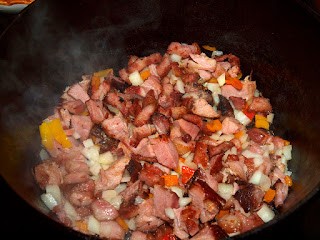 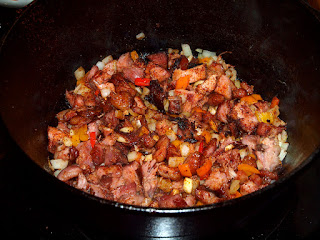 Deglazed pan with some beer 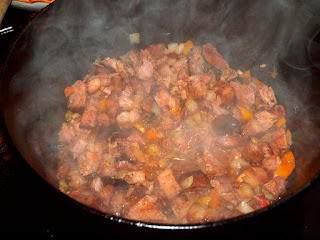 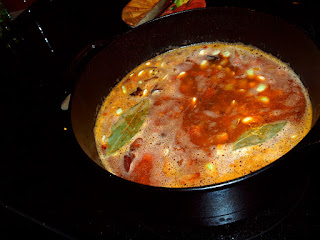 For the corn bread 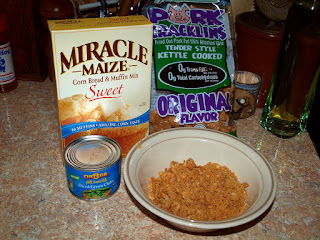 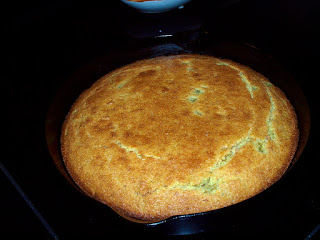 Beans done in the Crockpot 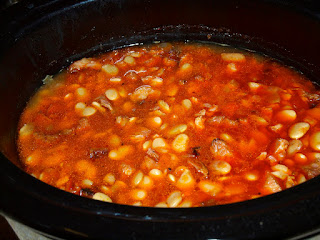 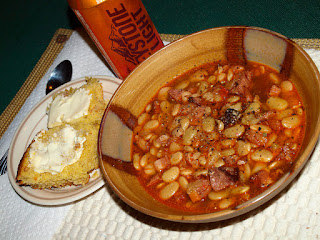