After looking at Ahron’s, (a member of LTBBQ site)  omelet this morning I was glad I had a good brunch planned. I fried some jowl bacon, poured the grease off to brown the ham. I used some of the bacon grease to fry two eggs. I nuked the grits to warm up and made some red eye gravy in the ham skillet. I poured in about a half cup of black coffee and a little coke. I served this over the grits and had some corn bread along with it.

It’s been a while since I made grits with red eye gravy and it sure tasted good!  Some make red eye gravy with just black coffee and some will add a little sour and or sweet. I saw on a cooking show where one chef added coca cola and I like using it. 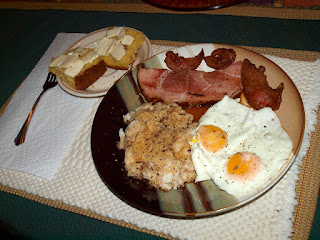