I saw this on the net lately; twisting bacon to fry. I had some bacon left to use with shrimp and grits I was having tonight. I thought these would be good dusted with some Savor Spices Super Pig seasoning.

I would do them on my Traeger pellet grill. A pellet grill is ideal for cooking bacon; it cooks all the slices evenly and you can do them to the doneness you like.

I fired up my Traeger and got the bacon out to twist; I had six slices. I dusted it on both sides with the Super Pig and had a little trouble getting it to stay so I secured with some toothpicks. I was using thick bacon and it was cold so maybe bacon at room temp would stay twisted better.

The Traeger was at 200 deg. grill level when I put the bacon on and eased it up to 270 deg. The last 20 minutes I went to 300 deg. I thought I better pull the toothpicks when the bacon was half done. At a half hour I pulled all but the end ones and pulled all on one piece to see how it would stay twisted. In another 10 minutes it looked good so pulled all the toothpicks. I had two tongs I used to pull them. After one hour they looked good so I pulled them off to cool.

I could not resist it I had to try a piece. It was great and as I looked at the bacon I thought now it’s uneven I better have another piece so it’s even for tonight’s supper; two for the wife and two for me!

I had to go down to the kid’s house to let an appliance repairman in and passed the wife on the way down. I called her and ask her to put the bacon in the fridge. I said don’t eat any; it’s for tonight’s supper. I didn’t tell her I had two pieces!

If you don’t have access to Savor Spices for the Super Pig use some brown sugar and crushed red pepper or cayenne pepper. If you don’t have a pellet grill it might do well making them on indirect heat on a charcoal or a gas grill or in the oven at about 300 deg.F.

This is a great way to kick up the looks of your bacon, serve it as an appetizer or along with soup. It would be good with cheese or tomato soup. You can go light on the Super pig for a good flavor or go heavy for some pig candy. Mine were good with my shrimp and grits tonight!

Seasoning and making the twists 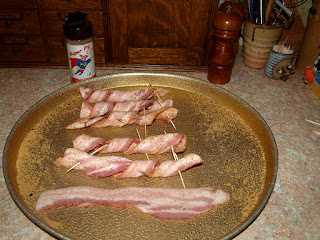 At a half hour 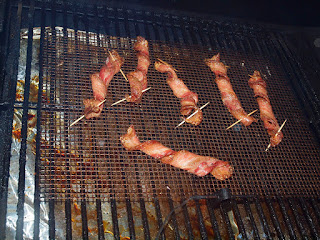 Done after one hour 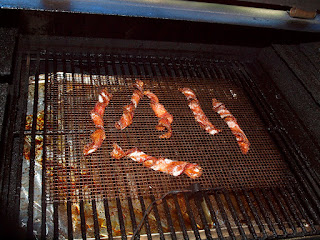 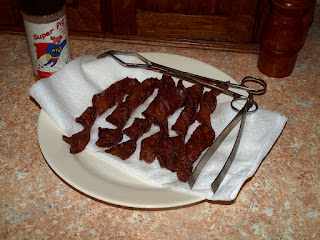