I got a quart of tomatoes in the freezer this AM and after lunch the wife and I did up 2 doz. Ears of corn for the freezer. I got 8 one pound bags for the freezer and it will taste great this winter.

The wife discovered a bag of corn in the freezer from last year so I used it in my supper. I had some pulled pork and jowl bacon from the freezer and had enough tomatoes left from this morning to use.
I had a recipe in my head, pork, bacon, green peppers, onions, garlic, corn, and tomatoes all done in a CI skillet. I would season with some Cajun seasoning, Worcestershire sauce, a little Cholula hot sauce. I had a box of Zatarain’s garlic butter rice I would serve it over.

Cornbread would taste good with it so I baked a Miracle Maize Sweet mix in a CI skillet.

I got the rice going in my rice cooker and prepped the onions and peppers. I started with 3 slices of jowl bacon diced and browned in the skillet. I removed the bacon and added in the pork just to heat through well then removed it in with the bacon. I added diced onions with some dried garlic flakes and two pats of butter. When the onions started to take on some brown I added the diced green pepper and then the corn. The liquid in the corn helped deglaze the skillet.

After that all heated up I added the pork, bacon and Cajun seasoning, Worcestershire and hot sauce. I added the tomatoes and stirred all well and let it simmer about 10 minutes, I added about ¼ cup of dry red wine at the end.

I served it over the rice with some buttered cornbread. Not too bad for off the top of my head and throwing it together. I think it would have been a little better with more tomatoes. 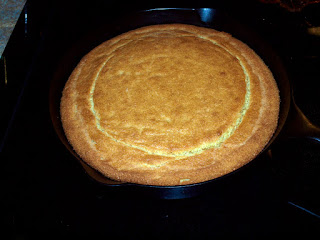 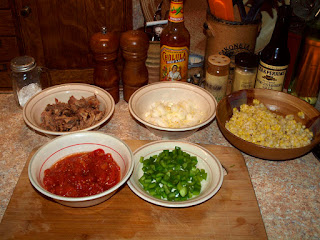 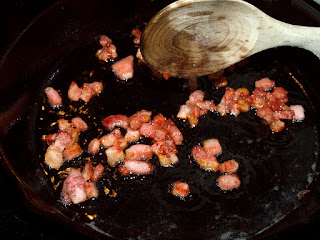 Pork added in to heat 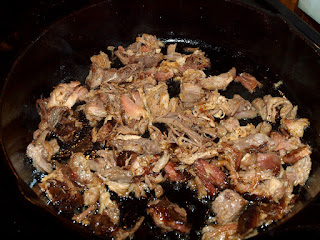 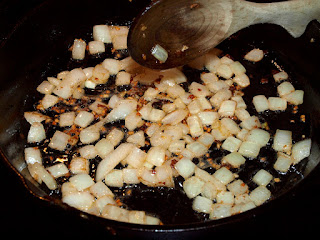 Green pepper and corn added in 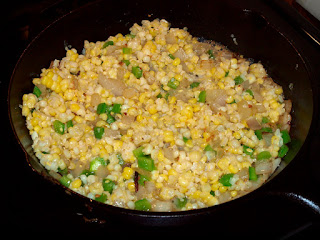 Meat seasonings and tomatoes added in 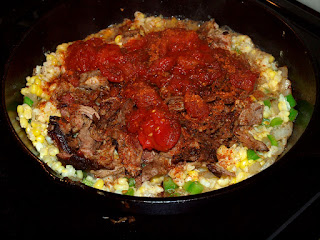 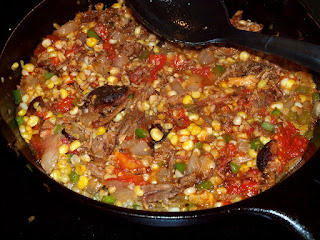 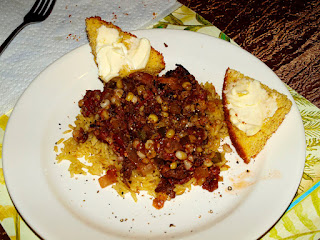