Another hot muggy day here and looks like more in store for next week. Last night we took the daughter in law and grandson out to eat at a great Mexican place here. After we ate the grandson mowed the grass for me.

I needed to edge and trim the back yard today but just too hot & muggy. Instead I removed the smoke stack from my Traeger, cleaned it out, sanded and repainted. I had burnt a lot of the powder coat off from emptying the auger without the heat shield in place. Don’t do that! Just one auger full of pellets was enough my display read 675 deg. and sparks were showing in the smoke cap.

I also cleaned and sanded the front of the barrel under the lid. It had some corrosion from dripping sauces down it. I used some Rustoliem Ultra High Heat Black Semi-Gloss to repaint. Now other than the lid being scorched on the bottom it almost looks new.

I ask the wife if she wanted a hamburger or brat burger for supper. She said brat burger so that’s what I fixed. I went to the farmers market today and got some nice small Kennebec potatoes then went to my butcher Kah Meats and got 4 cheese brats. I had wanted his standard brats but he didn’t have any in the counter. I wanted to use fresh and not frozen so thought I would try them even though I never tried them in a patty.

You can’t beat Kah’s brats and plenty of choices; he makes 17 different styles and keeps a good supply of them in the freezer. They are in vacuum sealed packs of 4. His brats are all in natural casings made from fresh pork, ingredients and seasoning, no preservatives. Some styles he does use an anticaking agent.  Next time you get some store bought brats look at all the preservatives that are in them.

Rain was coming this way so was going to do the brat burgers in my Traeger using the back side of grill grates. I used my Cuisinart 3 in 1 burger press removing the meat from the casing. The first one I made was a little messy so I washed the press and sprayed with a little olive oil that was better but not great I washed again and just used cold water and that worked pretty well. I got 4 nice patties made up and in the fridge to set up some.

I fired up my Traeger and eased the temp to 325 deg. grill level. I nuked two of the Kennebec potatoes for 2 minutes then mashed and a pat of butter on top. They went in a basket and on the smoker about 5 minutes before the brat burgers. I sprayed the grill grates with some olive oil and the brat burgers were on about a half hour turning half way. I sprayed the potatoes a couple times with olive oil.

It all tasted great; my wife had mustard tomato and dill pickle on her sandwich. I had mustard and a slice of Vidalia onion on mine with tomatoes on the side. 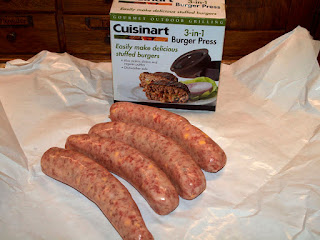 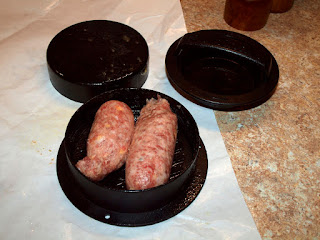 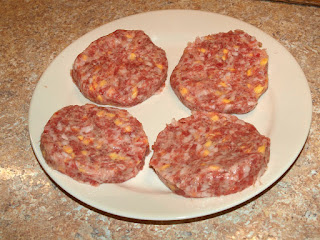 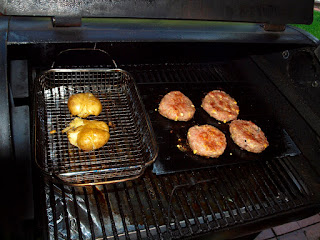 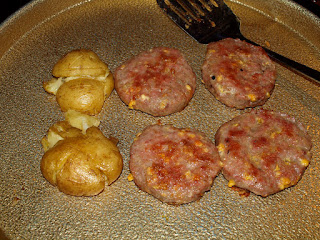 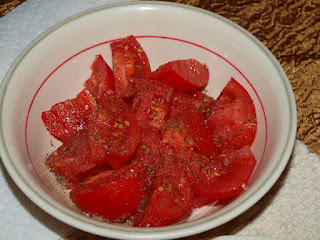 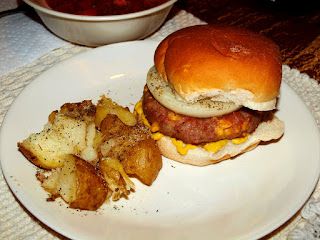