Brats, Apple Slaw and Corn On the Cob

I am getting tired of this hot humid weather! It is interfering with my outdoor cooking and my appetite too! With my COPD I get sapped pretty quickly when outdoors in this weather.

I had some tomato garlic fresh brats from my butcher, a head of red cabbage from my neighbor’s garden and some fresh picked corn from Suter’s; it was picked this morning. I was making some of akruckus’s, he is a fellow member of Lets Talk BBQ, apple slaw from the cabbage.

My Instant Pot 6 in 1 came today so I could try it out steaming the corn in it. It looks like it is well made.

The brats I planned to smoke for an hour on the Traeger and then brown up on my Weber Gas Grill. I made up the slaw after lunch; I just used a half head of cabbage so cut the ingredients accordingly.

About 4 PM we had a downpour for a half hour and got .8 inches. I thought I was going to have to brown the brats inside. I had some mini sub buns that would do well for the brats, I sliced some off the open edge and toasted on my gas grill. It all came together well but didn’t get as many pics as I wanted, I missed the finished slaw but you can see it on my plate.

I had a batch of my homemade Kimchi ready so I had to try that on my brat. The Kimchi and slaw doesn’t exactly go together but I like it. AK’s recipe for the slaw is a winner, the apple cider and applesauce dressing is great on it. My wife loved it and she had it on her brat.

The Instant Pot worked great; I had 3 ears of corn, one long one I had to halve, and it made one layer on the steam insert. There was enough room for another layer so you could do six ears in it. It took about 7 to 10 minutes to heat up and then went to timer mode; I had set to 4 minutes. 4 minutes later I shut it off and vented the steam. My wife and I both thought it was the best corn I have ever made. 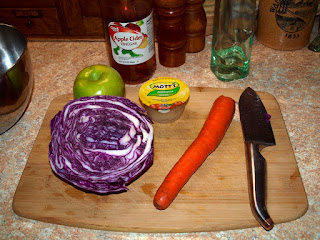 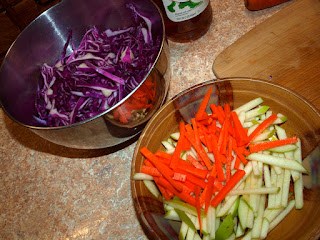 Corn in my Instant Pot 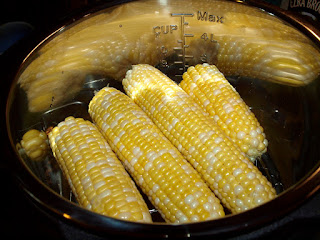 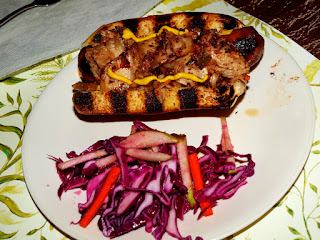 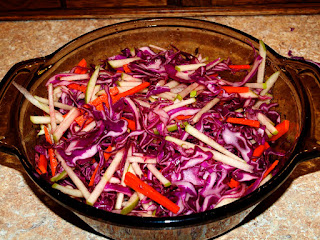