Wow looks like a few days below 80 ahead. Between yesterday and this AM we got over 2 inches of much needed rain. It cooled down after the front went through and was nice to set out. Would have been a good evening to cook out but already had the meal planned.

Tonight’s supper I had planned for Sat. evening. Our son was to play in an afternoon and an evening High School Alumni soccer game so wanted something simple to fix. Then he called and said he was picking up some Erb’s chicken at noon and wanted to know if we wanted some. The chicken is done over charcoal and good so had him get us some; we ate that for our supper. They ended up canceling the soccer games due to rain.

I had 3 ears of Suter’s corn to steam and got some of my butcher’s shaved smoked ham. I had tomatoes so I had open faced ham and tomatoes with a cheese sauce over. The cheese sauce was from what I had on hand, a can of Rico’s white cheddar, a handful of shredded sharp cheddar, some gorgonzola, a couple splashes of Worcestershire, and Cholula hot sauce all melted together.

I toasted the buns and sautéed the ham; I had about a ¼ lb. of ham for each sandwich topped with tomato and the cheese sauce.

The corn I did in my Instant Pot, 1 ½ cups of water with the steam insert in place. It took 9 minutes to heat and get to pressure and start the 4 minute timer. As soon as the timer went off I shut the pot off and vented the steam. I made up the sandwiches and served the corn.

The sandwich was great and so was the corn. Even though the corn was two days old it tasted fresh. It was tender sweet and came off the cob easily. Steaming is my favorite way to do corn on the cob and the Instant Pot does it easily and I think exceptionally well.

Corn in the pot 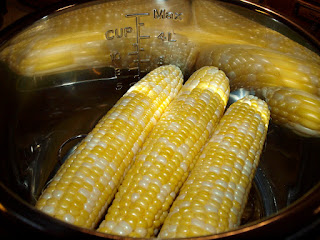 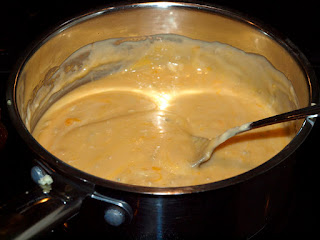 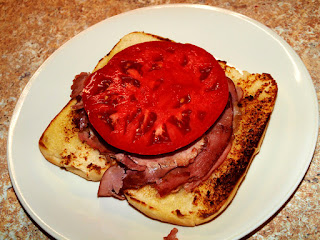 My ear of corn 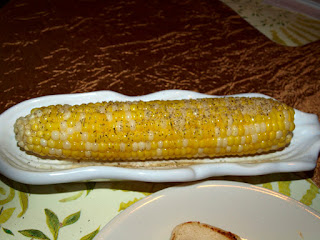 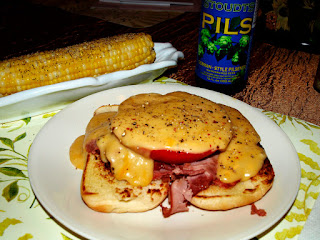