Ham Hock, Green Beans, Potatoes and Corn on the Cob

A favorite meal here in Midwest Ohio ham hocks, fresh garden picked green beans and new potatoes. We always had a garden when I was growing up so remember Mom fixing this a lot. She usually used left over ham and ham bones and any white potato would do.  She canned green beans so we had this in the winter too.

Mine over the years has evolved into using a smoked ham hock from my butcher, local grown green beans and new potatoes. For this year I had found some nice little new white potatoes at the Farmer’s market yesterday.

This is pretty simple to cook and I did mine outside on my gas burner. Cover the ham hock with water and add an onion, salt and fresh ground pepper. Bring to a boil and then simmer for 2- 2 1/2 hours. In the meantime wash and clean the potatoes and green beans. Some of the larger potatoes I cut in half.
When the meat is done and cooled remove from the bones and cut to desired size pieces. This hock was nice and meaty and had very little fat.

Add the meat, green beans and potatoes back to the pot; I chopped and added the onion too. Bring all to a boil and then lower the heat and simmer 30 to 45 minutes. You can check for seasoning here and add water if needed. I added a pint of water to mine.

I am not sure why I never thought of doing this before but this time I added some corn on the cob the last 5 to 10 minutes; why not have two of my summer favorites! One tends to get in a rut with some dishes and do it the same old way because that’s the way it’s done!  I had baked a take-home-and-bake baguette on the Weber Spirit for some bread and butter.

Did that ever taste good, the potatoes were some of the best tasting I have had lately. The sweet corn was good too and took on some nice ham flavor. 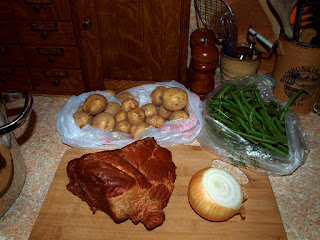 Hock and onion made some great broth 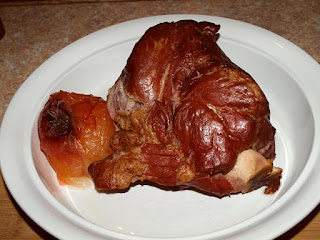 Ham and onions for back in the pot 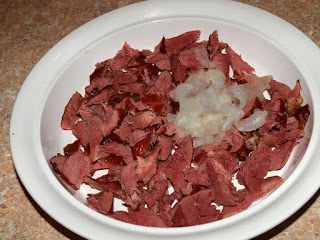 All in but the corn 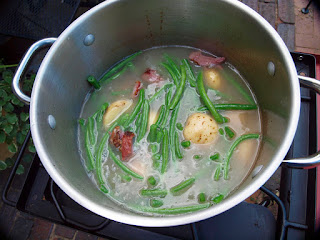 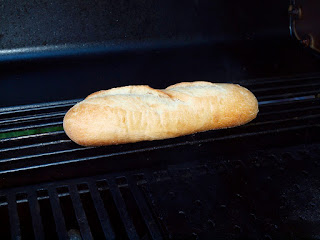 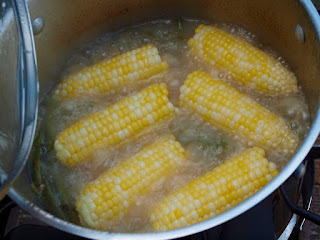 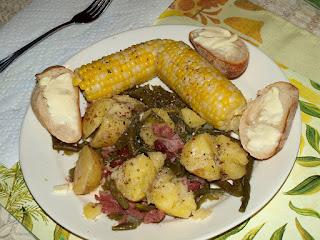