I had to try Old Dave’s pork burnt ends; I had the same rub and sauces he used, Blues Hog. I followed his recipe pretty close but I started with some already cooked pork butt. I had over a pound of pork butt leftover so I cut it in 1 inch chunks and trimmed most all the fat. I seasoned it with Blues Hog rub a couple of hours before cooking.

I had a white yam leftover to have and a tomato, pretzel bun and cheese casserole I made up from tomatoes from my garden. I layered the bun halves in a buttered casserole dish; wet each one with some chicken broth and a pat of butter. I then sliced up some red and yellow tomatoes on top and added seasoning. It went in a 350 deg. oven covered for 40 minutes, then removed the cover and added a little over a cup of mixed shredded cheddar cheese and in another 20 minutes.

The pork went on my smoker on a frog mat to smoke for an hour at 180 deg. about 200 deg. grill level. I then placed it in a foil pan and added sauce; I just eyeballed it and used about 2 parts Blues Hog Original to 1 part Tennessee Red Sauce. I upped the controller to 200 deg. for another hour. I then added a little brown sugar and 3 pats of butter. It went another hour for a total of 3 hours. The last 2 hours it was at 225-230 deg. grill level.

The burnt ends and the tomato casserole were done at 6:00. I heated up the yams and served the wife and me. I did not think I would be crazy about the burnt ends, since I am not a fan of overly sweet meats. I loved these and will definitely fix them again. I liked Dave’s choice of the sauce and rubs, the sweet and heat was about evenly balanced. I would like the heat to stand out but then the wife would not like them. These are good Dave, thanks for the recipe! 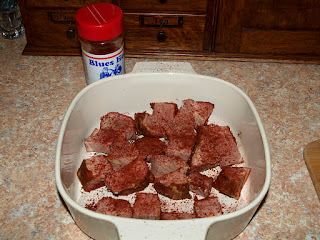 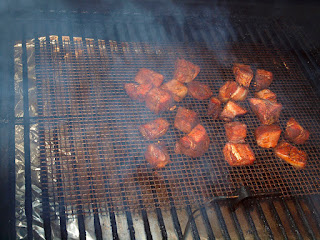 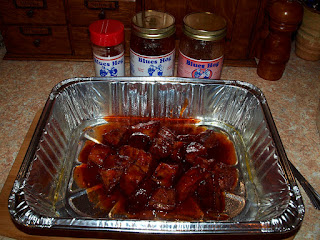 Buns with chicken broth and butter 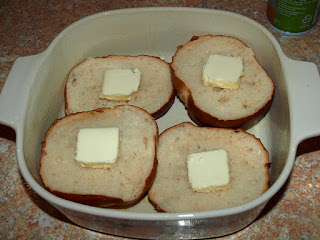 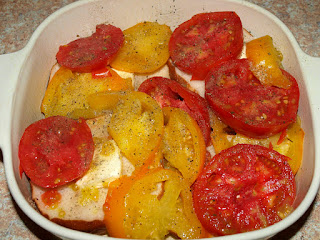 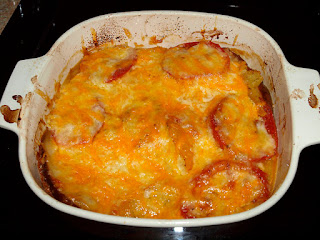 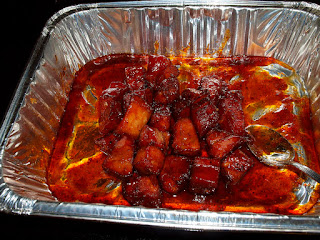 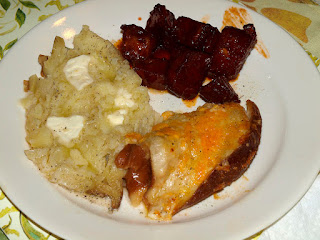