Baby Back Ribs and Baked Potato

I think I have cooked 7 days in a row; mostly sandwiches. It was time for just some meat and potatoes. I had a rack of pork baby backs and I have been on a quest to have the wife say they are at least as good as Old Dave’s! She had some of his ribs at the Ohio gathering and said they were better than mine.

Dave told me some of his secrets to good ribs but I should have watched him a little closer; sometimes you learn more from watching than listening! Now I have cooked ribs over 30 years and do turn out some good ones but I did like his better.

I used to never pull the membrane but did pierce it with a pickle fork. I decided to leave it on this time and show using my pickle fork in a photo below.

Dave uses Blue Hog rub and two of their sauces. He didn’t tell me which two but I chose their original and the Tennessee red sauce mixed 1 to 1. Basically I did them for 5 hours, 2 at 180, sauce them and add some agave syrup and I used maple syrup instead of honey, some pats of butter then  double wrap in foil, 1 hour at 200 meat side up and 1 hour at 225 meat side down. Remove from the foil; brush on more sauce and another hour. My grill level temps were 25 deg. hotter than set temps. After removing from the foil I did have to go to 300 grill levels to get them done so next time I need a little higher when wrapped.

I did a can of black pepper spam, sliced part way through and some Blues Hog Rub added for an hour at 180 deg. and then sauced and on for another 45 minutes. It was not done enough but the cook was hungry and it did taste great anyway!

I did some baked potatoes our favorite way, a potato rod inserted and baked at 350 deg.  two hours for med. potatoes and 2 ½ for large ones. Then slice in half and serve with any toppings you want. After you eat out the potatoes you have a very crisp potato skin to enjoy. I had some leftover stewed tomatoes and corn for a side and some rye bread and butter.

I thought my ribs turned out pretty darned good. I asked my wife what she thought and she said “You’re getting there”! I guess I have to try a little harder! 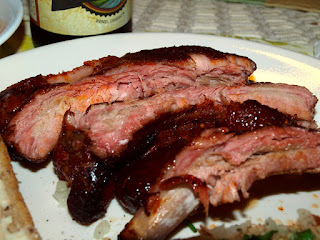 Ribs ready for the smoker 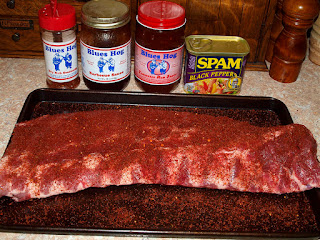 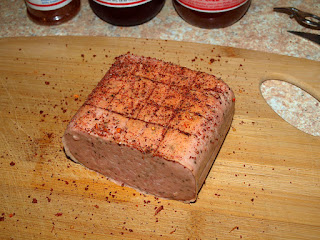 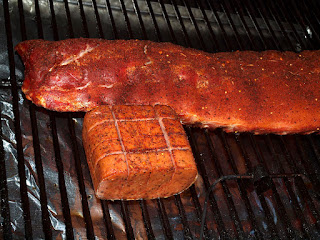 2 hours in, removed the spam for a snack 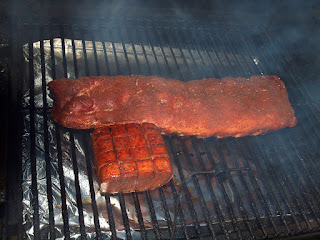 Ready to foil for 2 hours 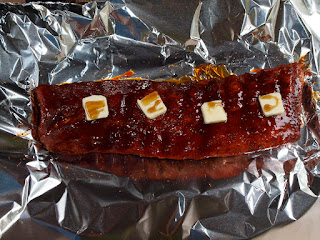 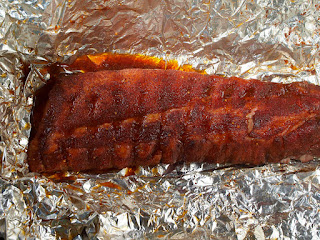 Another 40 minutes the ribs were done 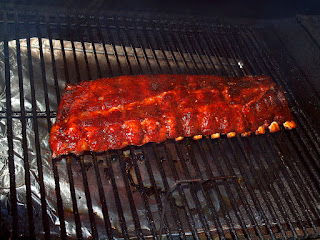 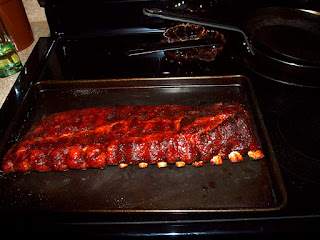 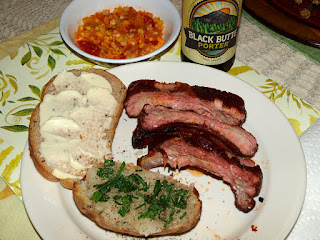