When I was at Kah Meats the other day to get bacon for my BLT’s I needed something for this week-end. He had some nice 1 ½ inch thick bone in pork chops so I got two of those. The last time I did thick chops I stuffed with some bacon and maple syrup and they were good.

I had some pierogies frozen so I thawed them and got a head of cabbage for some fried cabbage to have along with the chops. I brined the chops in 2 quarts of water, 1/3 cup of coarse salt and ¼ cup of molasses overnight.

About 11 AM I rinsed the chops and dried and put them on a rack and in the fridge to air dry. An hour and a half before cooking I cut slits in the chops, added a teaspoon of maple syrup and the bacon then secured with a couple of toothpicks. I seasoned them well with some Blues Hog Rub and back in the fridge.

At 5:00 I got a cast iron skillet going on my gas burner with some chopped onions and butter. When they started to brown a little I added the pierogies and warmed on both sides then removed from the skillet. I added a little bit of diced bacon I had and then added some chopped cabbage with salt and pepper.  It needed a little more grease so I added a little olive oil. When the cabbage started to wilt down and get soft I added the pierogies back on top along with the onions. I then placed the skillet in my smoker to finish cooking with the chops. It was in the smoker about 40 minutes.

I had placed a temp probe in one chop and at 5:50 it was up to 160 deg. IT. I double checked the chops with my thermopen and it was right on. I placed the chops on top of the cabbage and pierogies and let set a few minutes before carrying all inside.

We had it with some bread and butter. The chops were tender and delicious. I was pretty heavy on the Blues Hog Rub but adding the maple syrup near the end balanced out any heat so it was tolerable for the wife. The cabbage and pierogies went well with the chops. 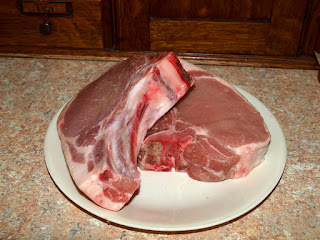 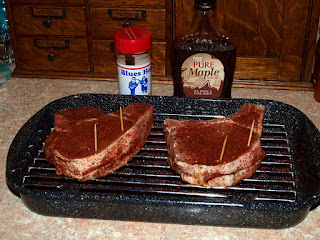 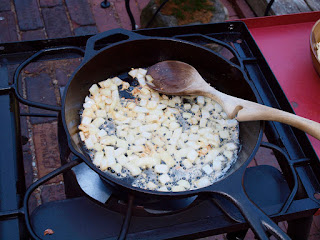 Pierogies added to heat up then removed to the side 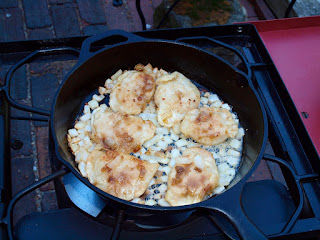 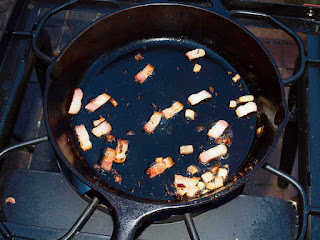 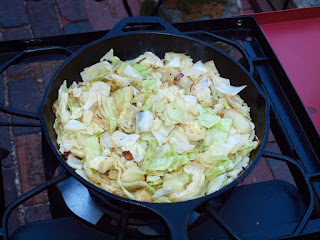 Pierogies added and then in the smoker 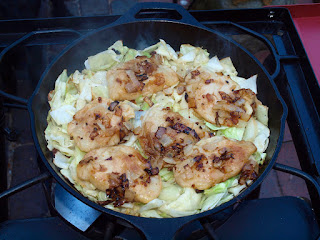 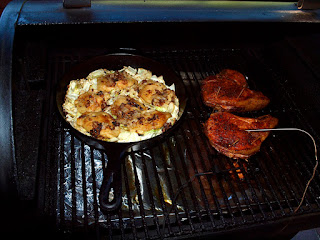 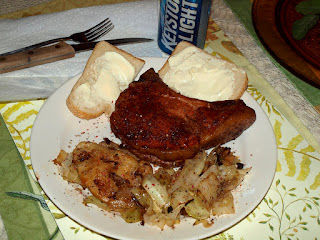