JBLT's and White Corn on the Cob

It was a great week-end and I fixed two of my favorite summer meals. Yesterday it was ham hock, green beans and potatoes; for the first time I added some corn on the cob and it was delicious. Today would be jowl bacon BLT’s and some white corn on the cob.

The produce stand where I have been getting my sweet corn every summer for over 30 years always has some white about mid-season.  Their standard is bi-color and it is delicious but I like the white too. Saturday I bought six of each kind; I used 3 of the bi-color in my ham, green beans and potatoes. I saved 4 of the white ears for tonight’s supper.

I nuked the remaining 6 ears of corn and cooled; my wife cut it off the cob to freeze. I had a large tomato from my garden for the sandwiches but picked what was ripe; I just had 3 med. sized ones and a few grape tomatoes. It has been a bad year for tomatoes; way too much rain.

I baked a mini baguette, take home and bake, in my Weber Spirit to use for the sandwiches. I had a jowl bacon from my butcher Kah Meats; 1.25 pounds. I sliced up a pound of it and fried up for the sandwiches. I have cooked the bacon on my Traeger but I think jowl bacon really shines when fried in a skillet in its own fat. All I had to do for supper now was steam the corn.

We ate supper about 6:30 and tasted great. I had mustard and mayo on my sandwich and butter, Penzey’s sandwich sprinkle and parmesan cheese on my corn. The white corn was good for a change.

I haven’t cooked as much the past week, I have been doctoring for a bad headache I get at night. Then Saturday after eating one of my favorites my cable modem went out so I had to wait until I got  new one this morning before I could post. 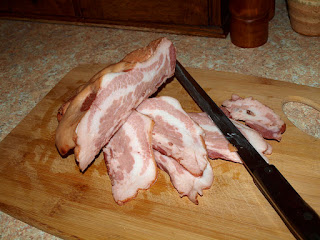 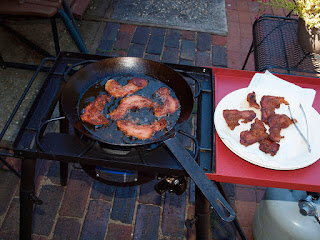 Ready to steam the corn 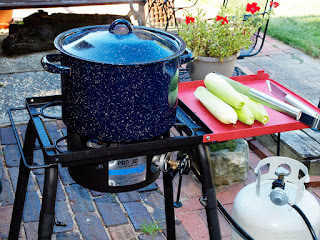 I had two of these 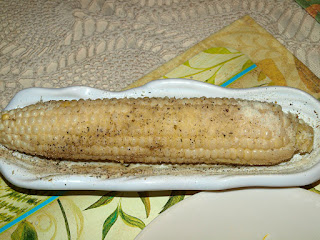 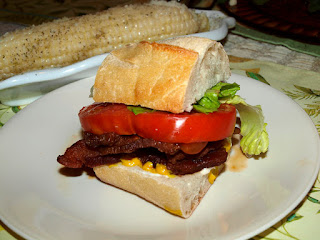