Week-end Snacks for my Supper

Last night I had my week-end snacks, pickled ham and garlic ring bologna along with some Kerrygold cheddar on crackers for my supper. I was tired out from watching the daughter in law paint! She did a great job and got it all done. My wife had some leftover chicken for her supper.

I had to get into the pickled ham early for a taste; it was great but to me could stand some heat. I added a dried red pepper to the jar. By supper time the pepper had not added much so I had mine with some Blues Hog rub and Cholula hot sauce. I had some good brew to wash it down.

For me the pickled ham is a winner for a great appetizer or snack. This will be a good use of leftover ham for me now! 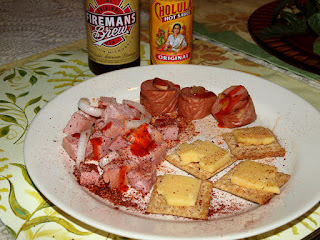