Last night the grandson ate with us and we had carry ins from Captain D’s. He said why don’t you make some sloppy joes Grampa. I said OK we’ll have some tomorrow night.

I remember his Dad loved sloppy joes and requested them a lot. He always wanted the Hunt’s Manwich sauce. I didn’t care for it but obliged him a lot. Whenever I tried some sauce from scratch he didn’t like it as well but I did! I think any I made was better than Manwich but I never wrote any of them down to save.

I got a pound of ground chuck from my butcher and went to the grocery for the sauce and buns. I planned to use a packet of McCormick’s seasoning and tomato sauce. I was looking over the sauce and gravy packets and found a sauce already made by McCormick and decided to try it. I stopped at the Sutter’s corn wagon and got 6 ears of their white corn. The grandson loves corn on the cob and so does Grampa! We gotta eat the corn now, another few weeks and the season will be over.

I steamed the corn in my rice cooker, and browned up some sliced new potatoes to have too. I browned the ground chuck, poured about half the grease off and added some chopped onions. When they were soft I added the sauce and let simmer about 10 minutes before serving.

If you need a sloppy joe fix I would recommend the sauce. We all liked it, the next time I will try some chopped green peppers in it too and maybe a tablespoon of vinegar for a touch of sour.

The sauce, potatoes and ground chuck 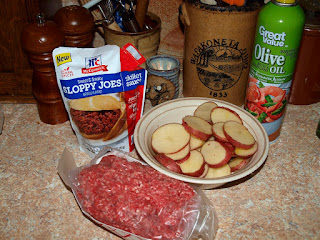 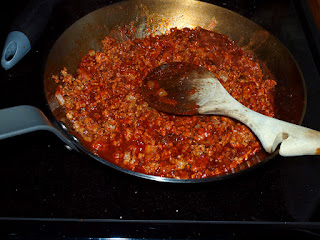 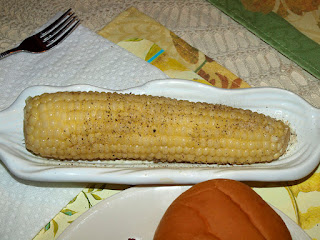 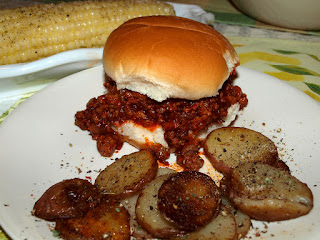