I haven’t done many cooks the last few days. Our daughter in law, who is a good painter agreed to paint the front and back barn siding for me. I had started washing down the rest of the house which is vinyl coated aluminum siding and was half done. She wanted to start painting Sat. AM so Thursday I finished washing the house down.

I mowed grass today and had planned on smoking some week-end snacks. Art, a fellow member of LTBBQ had posted a recipe for Pickled Ham from the Ronneberg Restaurant in Iowa, looked good to me. I went to my butcher Kah Meats and bought a center cut slice of his smoked ham; 1.6 pounds. I also bought some of his ring bologna.

After I got the grass mowed I fired up my Traeger at 200 deg. Even though the ham was fully cooked I decided to smoke it some first before pickling. The ring bologna I would do my favorite way; cut slits in it and add slivers of garlic. As an afterthought this time I added some Blues Hog Rub and rubbed it into the slits too.

When the ham had cooled enough I trimmed all the fat and edges, the edges were a cooks treat! I cut the ham into ½ inch pieces and added it along with a small sliced onion, 1 ½ cups water, 1 cup white vinegar and some fresh ground pepper to a half gallon ball jar. It went into the fridge until tomorrow night.

I didn’t let the bologna cool long before I had to try it. It was delicious and liked the addition of the rub. I just now had a couple pieces of the bologna for a late night snack and it is half gone now.

Ham and bologna ready for the smoker 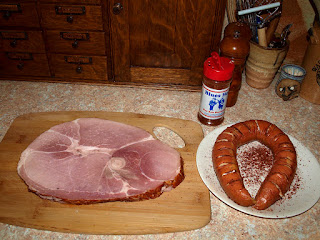 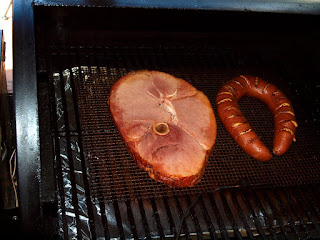 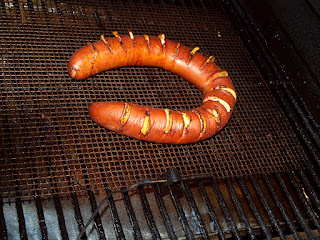 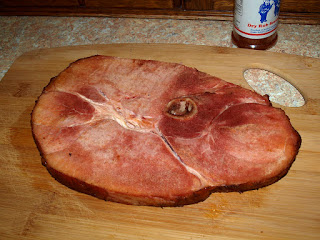 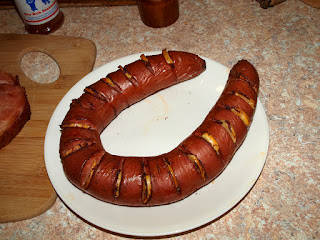 Ham in to pickle 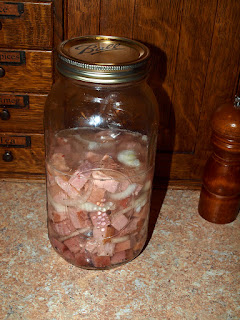