The grandson had a soccer game an hour south of here so the wife went with them. I hate it that it makes too long of day for my back and leg to go along. At least I can still make his home games to see him play.

After I smoked some peanuts today I found one green tomato in my garden that would do for fried green tomatoes. I don’t like them when they are dark green and still too hard, when they turn a light green or even have a little red they are ready.

I wanted to fry the bacon and tomatoes outside but by 5:00 pm rain was getting too close. I breaded 3 slices of the tomato and in the fridge to set up. I dipped them in flour then egg and then panko bread crumbs. Cracker crumbs used to be my favorite but now I prefer the Panko bread crumbs; some people like cornmeal.

I sliced and fried up plenty of the jowl bacon for my sandwich. I lightly coated the bacon with some Savor’s Super Pig. I don’t care for the pig candy that is made from a heavy coat of Super Pig but found I do like a light coat on my bacon. I then took a beer break, well maybe two!

I reheated the bacon grease and fried the green tomatoes; a minute or two on each side to get a nice golden brown. I lightly toasted some rye bread for the sandwich and had left over tater tots with country gravy for a side. I made the sandwich with mustard on the bottom and mayo on the top slice; plenty of bacon added with the tomatoes on top. I had a good Yuengling beer with it.

That was a great sandwich; I would make it again but think I prefer just a standard BLT and have the fried green tomatoes on the side. 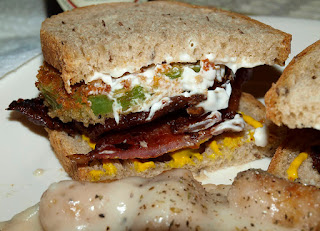 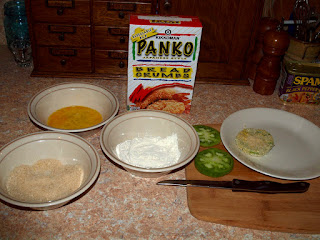 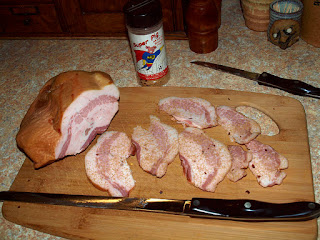 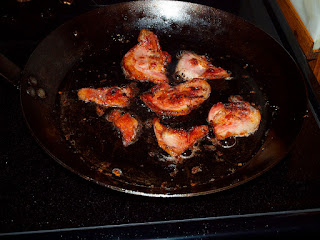 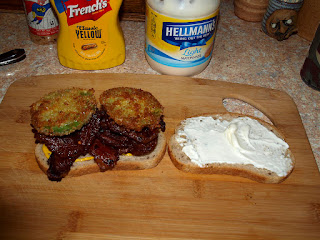 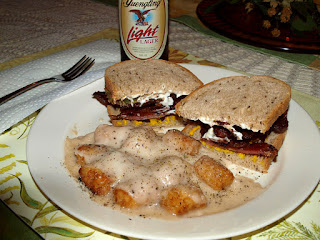