Spam is not something I eat regularly but I get hungry for it now and then. I remember my Mom used to fry it for sandwiches and I liked it. I read where in 2007 it had sold over 7 billion cans! It is made by Hormel and became a regular item to feed out troops in WWII. It now comes in 16 different flavors. I have tried the BBQ flavor but prefer the original. It is made from pork shoulder and ham, all good meat.

I had corn cut from three ears and 4 nice sized tomatoes from my garden so I made stewed tomatoes and corn for a side. I sautéed some chopped onions, orange pepper and then added the corn to heat then the tomatoes I had removed the peels, some salt and prepper and a teaspoon of sugar. It all simmered about 40 minutes.

I had a bag of Ore Ida tater tots; I did some on the Weber Spirit for about 15 minutes then fried the Spam. I had sliced the can of Spam into six ½ inch slices and fried them about 6 minutes on each side to get crispy. I had made a batch of Pioneer mix country gravy for my tater tots.

My wife had mustard and dill pickle on her sandwich and I just had mustard. She had turned up her nose when I told her we were having Spam sandwiches but after the first bite she said mmm pretty good! It was good and satisfied my hunger for some Spam! 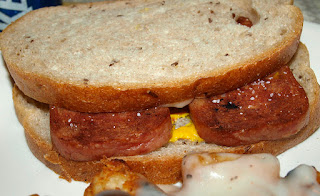 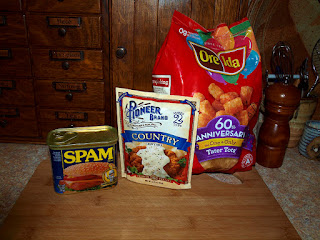 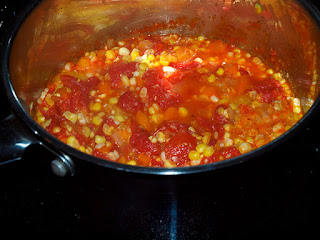 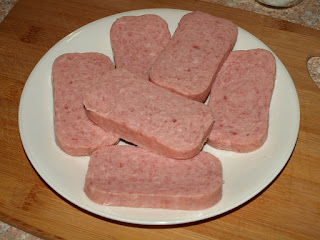 About done on my Weber 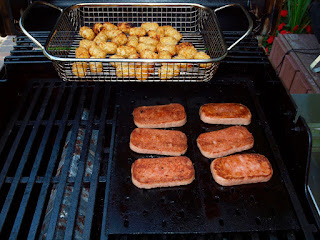 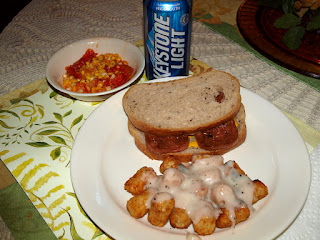