I love about any kind of nut and keep them around to munch on. My favorite variety to smoke is pistachios in the shell. They take on a nice smoke flavor. Cashews and pecans will take on some smoke but most of the other varieties are too hard and smooth to take on much smoke.

For this batch of peanuts, I had about a pound can of Planters; I decided to get a little help from liquid smoke. I mixed a tablespoon of olive oil and a ¼ teaspoon of liquid hickory smoke and poured over the peanuts. I stirred to make sure all were coated well and then added some Penzey’s sandwich sprinkle and Cajun seasoning. I just eyeballed it but was about 2 teaspoons of each.

It was a nice day to be out with the smoker going. I preheated my Traeger to 180 deg. and did the peanuts for 2 hours; stirring them after an hour. My Savannah Stoker V3 controller had a steady rhythm of going from 170 to 190 deg. and putting out nice smoke.

They came out good and have some smoke taste; next time I may go to ½ teaspoon of liquid smoke. I don’t want to use too much. Even though Liquid smoke is a natural made product to me too much can taste artificial.

It took me a while to learn in my older age when you eat peanuts you must chew them up as fine as you want them to exit! 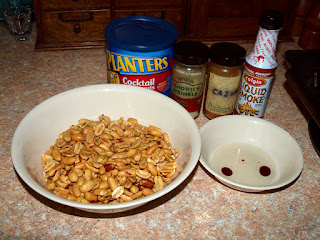 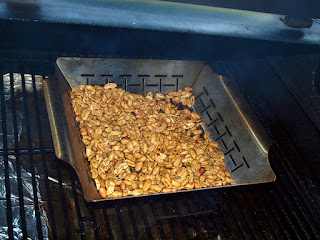 All done and cooling 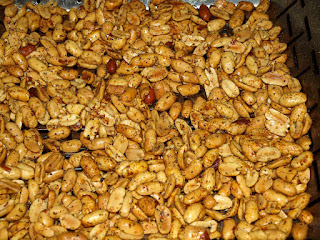 Email ThisBlogThis!Share to TwitterShare to FacebookShare to Pinterest
Labels: Snack