The SW is having a heat wave and here in Ohio it has been rainy and on the cool side. It’s a cool 67 deg. out this morning. Saturdays cook I had some left over pulled pork and some honey smoked turkey to use up. I wanted to use Keymaster’s sauce recipe.

My wife said the grandson was coming over and help make ice cream. That would mean someone else in my kitchen and I don’t like that! Change of plans I would just use some canned mild green chili sauce, I was getting a little lazy anyway!

My sides were; avocado w/ lemon juice over and a little gray seas salt, sliced tomatoes and a salad. I used corn tortillas and warmed in olive oil in a hot skillet 20 to 30 seconds on a side. I made up 3 turkey and 5 pulled pork enchiladas with cheese and chopped onions. A little of the green sauce in the bottom, enchiladas seam side down, more sauce down the middle and cheese on top. My shredded cheese was a Mexican blend. I had these made up about an hour before cooking.

My wife and grandson had the ice cream mix made and cooling in the fridge. My wife made up the salads for us. I had the avocados scooped out and lemon juice over.

I had the enchiladas made in two dishes and did them on my smoker. I did them at 325 deg. grill level temp for about 40 minutes. Our daughter in law had the turkey ones and my wife, grandson and I had the pork ones. Our son missed out again, he was working.

This was good for quick and easy and I used some leftovers up. As soon as we got done eating they put the ice cream on and about 35 minutes later we had some homemade vanilla ice cream and chocolate pudding cake for dessert. 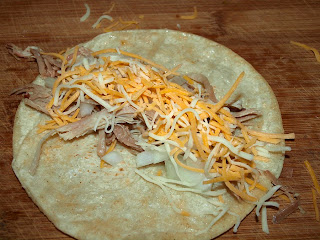 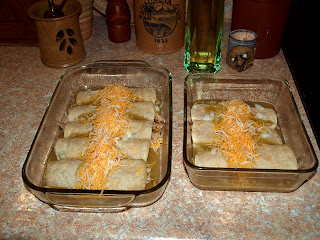 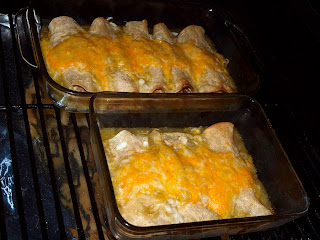 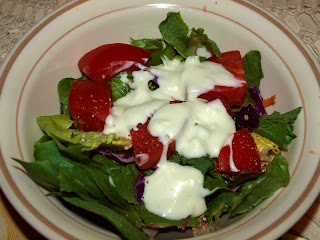 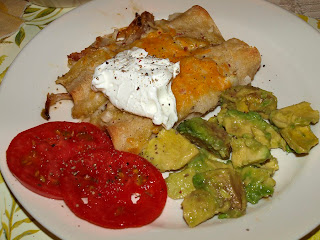