My wife and I went to Columbus, OH over the week-end and stayed two nights. My cousin and wife were celebrating their 60th Wedding Anniversary! Their four children gave them a party at the Hilton Garden Inn. Their cake was topped with the top from their wedding. The wife was born in Scotland so the finale was two Scottish dressed in full regalia came down the hall and into the room playing bag pipes, pretty awesome! My cousin was a retired Navy pilot. We ate some great food and it was nice to get to visit with the children.

Back to normal today trying to get the yard mowed before rain came in. I just got started mowing and a neighbor and old work buddy stopped by, talked over an hour so then I was behind. I had some chicken brats and some garden produce from our daughter in law, summer squash, zucchini, a green pepper and two small onions.

I nuked some small golden potatoes and simmered the brats in some Yuengling bock beer for 15 minutes then on the smoker on smoke mode for about 40 minutes. I had planned on a couple of hours but was too far behind.

After the smoke I sliced the brats and in the skillet with peppers and onions. I then added the sliced potatoes and browned. I had eased the smoker up to 375 deg. Last I added the squash, zucchini and garlic seeds. The garlic was seed heads and about the size of popcorn kernels. I was not keeping track of time but took about 45 minutes to get done. It would have taken less time on the stove top but this was more fun.

I served it with some crusty bread and butter. Tasted mighty good! 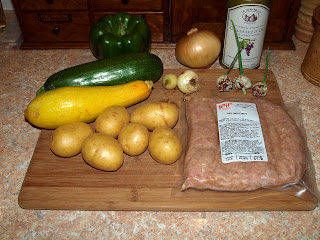 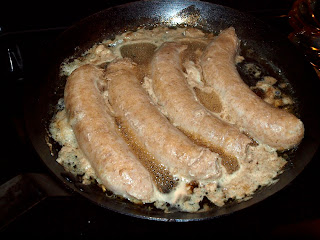 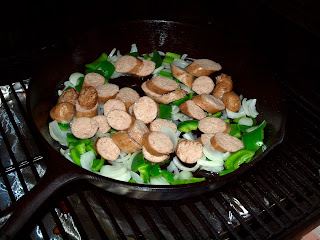 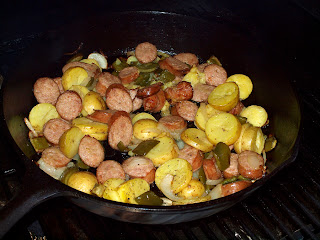 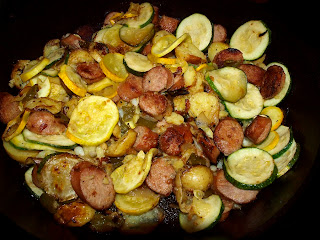 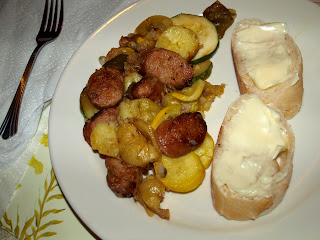