Bloomin Onion on My Traeger 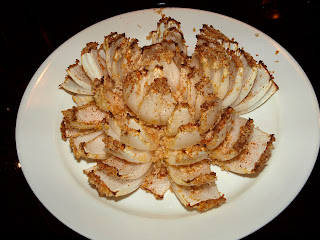 Our daughter in law signed up for a weekly produce basket at work and brought me the largest onion I think I have seen from a local garden. The first thought was make a bloomin onion. I did not want to deep fry it so looked up how to bake one. Anything done in an oven I can usually do on my Traeger. I got some ideas how to do one. I told the kids to come over for supper; we would get our favorite pizza from Sandman and I would do the bloomin onion.

Years ago Sandman’s Dad gave me a hint when I told him I wanted to do one at home. He said soak it in ice water and it will bloom easier. That works well. An easy way to slice the onion is cut the top off and remove outer layer. Slice some of the root off so it will set level. Place it cut side down on a cutting board. Then starting an 1/8 inch from the root slice straight down through.

After I got the onion all bloomed, spread out, I beat an egg and brushed it on and then sprinkled on Panko bread crumbs I had seasoned with some Penzey’s old world seasoning. I pre-heated the Traeger to 325 deg. and as soon as I put the onion on went to 350 deg. It was done when the pizza was ready about a half hour.

Everyone liked this, Sandman’s pizza and my bloomin onion! I had some Benedictine cheese spread and some ranch dressing to dip the onion petals in. My son said after having this one he wouldn’t want one deep fried again.It is healthier too. 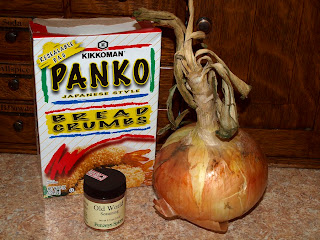 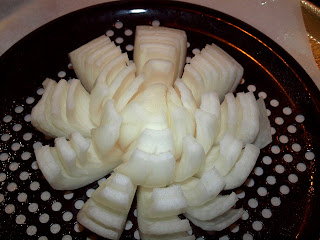 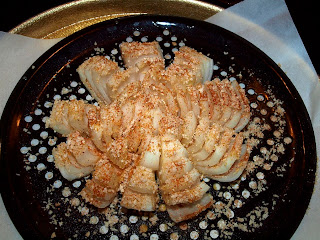 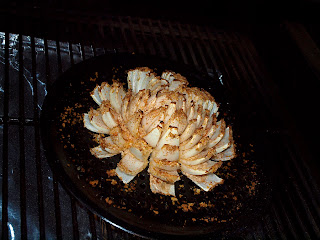 Pizza and onions with dip 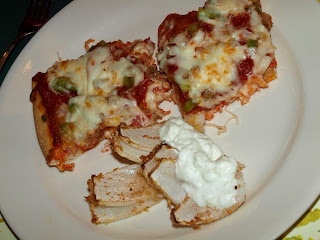