My New Years Day good luck dinner is; brats, brockwurst, pork, sauerkraut, and Knopfles, (German drop noodles). I made some of Ree’s, Pioneer Woman, mashed potatoes to serve it over. I also heated up some seasoned black eye peas as a side and made no knead bread to serve with it.

Here in the US we have no one dish that is traditionally done on New Years Day. Black eye peas are probably done the most, but they are mostly a southern tradition. Any other dishes are derived from ethnic or religious backgrounds. The pork & sauerkraut is German & I got the idea from a friend and adopted it for my New Years dish. The black eye peas I got from my southern cousin. So now I have two good luck dishes for New Years. I have done the pork & kraut for at least 20 years and added the peas for about the last 5 years.

I don’t usually fix pork & kraut during the summer; it is more of a fall & winter dish. Served over mashed potatoes it is one of my favorite dishes & I am ready for it come New Years day. Some brats of choice and pork ribs are the best meats for my taste. This year I had some Pernil Asada left that I would use along with the brats.

I made the no knead bread and mashed potatoes the day before and my wife made the drop noodles. I usually let her make them; she does a better job than I do! She does not use a recipe, just some eggs, flour, & adds water to get the right consistency. We had never done the drop noodles ahead before but they did turn out good. After she drained them I let them cool awhile then drizzled some olive oil over & stirred to coat. This would keep them from sticking together. The first time I made them they were too mushy. I did find a recipe that works for me, & you need rapid boiling water as you cut them in. She usually cut them in right out of the bowl but this year she did it from a tablespoon & said that was easier on her arm. The photo of her doing them is from last year.

I found that 1 cup is the right amount of water to add to 2.5 cups of flour in my no knead bread recipe. This gives it nice air pockets and some rise. I will post a printable copy of the recipe.

I got my brats on smoking at 175 deg at 2:00 and planned on eating at 6:00 pm. I put the brats on first then about 20 min later I added the brockwurst, they are fully cooked. I sprayed my 5 quart Lodge Dutch oven with some olive oil & layered a med sweet onion and 3 smashed garlic cloves in the bottom. I had the pot on a med low burner to preheat some. At 3:30 I upped the smoker to 225 deg & brought 3 of the brats & 3 of the brockwurst in sliced in half & added to the pot. Next I added some on the Pernil Asada pork in, about two handfuls. I added a bottle of Yuenglings Black & Tan beer. I poured the juice off the sauerkraut & added about ¾ of the one pound bag over the meats, plus some salt & pepper. Placed the lid on the pot and back on the smoker & let it slow cook. My Traeger set at 225 deg. was running closer to 240 deg.

After one & a half hours with the lid on I removed the lid & added the drop noodles at 5:00 pm. I stirred to combine some and did for another hour without the lid. I had taken the noodles & mashed potatoes out of the fridge about 3:00 to warm to room temp. I dotted the mashed potatoes with pats of butter and a little Lawry’s seasoned salt, no MSG, for a little color. I put them in a 350 deg oven for a half hour. The pork & kraut was done at 6:00 pm and served over the mashed potatoes, a side of black eyed peas and some good bread & butter made for a fine meal. 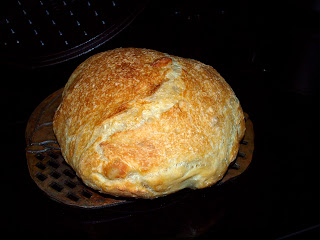 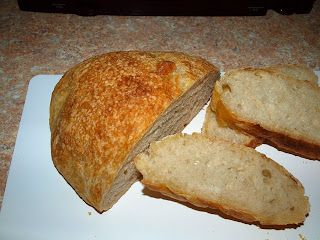 My Wife Cutting in the Drop Noodles 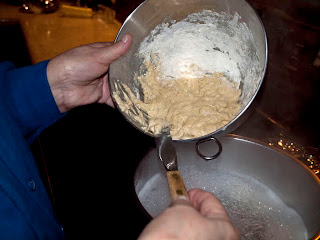 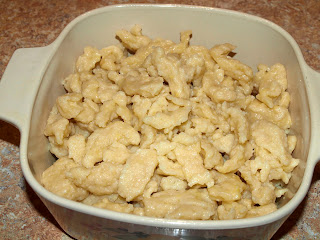 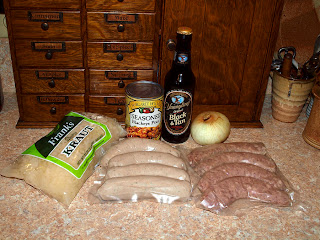 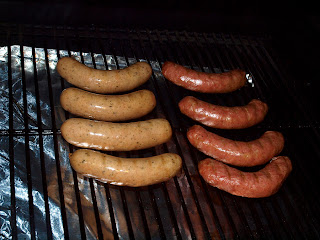 Onions & Garlic added to the pot 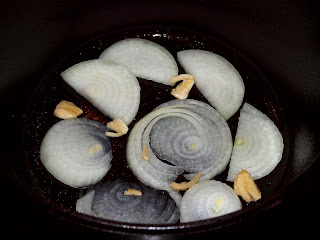 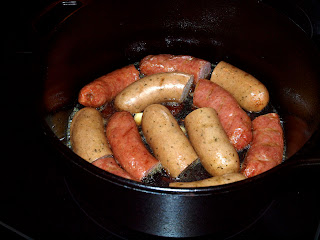 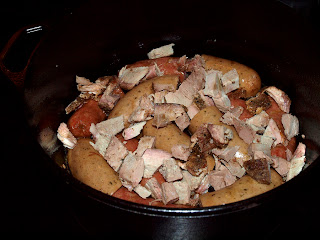 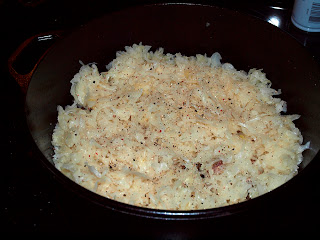 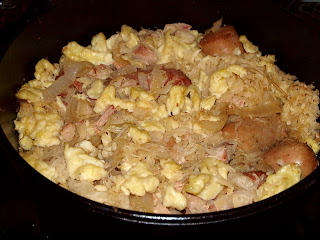 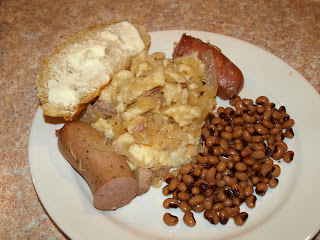