Smoked sausage balls, I had done some awhile back, made from some of my home made boudin sausage. They were good but found they do not freeze well. They have rice in them and I have found any cooked rice does not freeze well.

Just lately on pelletheads forum a member did some with Bisquick. Everyone picked up on it and were making sausage balls using the Bisquick and some doing their own version. I thought the Bisquick recipe was too heavy on the Bisquick and would come out more like biscuits with sausage. It called for 3 cups of Bisquick per 2 lbs of sausage. I thought using some cornbread mix, like Jiffy, sounded better.

I decided to make some and while I was at it would try 3 different ones to see which I liked best. I remembered years ago at Christmas gatherings, my wife’s cousin made sauerkraut balls that were to die for. We found her recipe and it called for ground ham instead of sausage. It didn’t look like they would adapt well to doing on the smoker. They were browned in a skillet then refrigerated and deep fried when ready to use. I found one recipe that would be good to use but I used bread crumbs instead of Quaker oats.

I remember seeing an appetizer recipe lately that was cornmeal mush cut in circles, scooped out a little, and shredded beef was added. I buy cornmeal mush that is in a tube so that would be easy to use with sausage balls. Now I had my 3 different kinds to make, sauerkraut balls, cornbread with cheese balls, and some plain for in the mush.

I bought one and a half lbs of fresh sausage and used a half lb for each one. I mixed in 3 eggs beaten, about 2 /3 of med sweet onion diced small, and some course grind garlic powder, a teaspoon of salt and some fresh ground pepper. I mixed well and divided into 3 bowls, then placed in the fridge for a couple of hours.

For the sauerkraut balls I added 1/4 green pepper, diced small.
¼ cup plain bread crumbs.
About 1 cup of sauerkraut, chopped.
This made 8 sausage balls 1 ½ inch diameter.
I rolled them in some bacon bits before smoking.

For the cornbread balls I added 1/8 red pepper, 1/8 green pepper diced small
½ cup Jiffy cornbread mix
About 2/3 cup of shredded sharp cheddar cheese
I made these a little larger and got 5 balls

I made plain ones for the top of the mush, I added ¼ red pepper diced small
¼ cup plain bread crumbs
I made these into 8 balls, cut the mush about 5/8 inches thick. I used a ½ teaspoon to dish out the mush and added the sausage balls.

I placed them all on a tray covered with parchment paper & placed in the fridge for about four hours until ready to smoke.

I added the second shelf to my smoker, placed the sausage balls on 3 different trays. This way I could rotate if necessary or pull if done at different times. I smoked them for one hour on smoke, about 175 deg. After one hour they looked like they were cooking about even so I went to 275 deg. After ½ hour I added some of my peach chipotle BBQ sauce to some of the ones on the mush. Checked the temp & they were all at 160 deg so I dropped back to 250 deg for the last half hour.

I pulled them all after 25 min and placed in a 200 deg preheated oven, while I fixed my Bob Evens Mac & Cheese in the microwave to serve with them; that took six minutes. I had made some horseradish sauce to use with the sauerkraut balls. One TBS of sour cream, two TBS of Woebers horseradish sauce, and a TBS of mustard. It was good with the kraut balls and pretty warm, made my nose run.

I liked them all, the ones on mush were good but I would say if I do them again I would do the balls on the smoker; then fry the mush with some oil or bacon grease until real crispy. If you like the mush just hot doing together is easier, but I am used to my Mothers mush. She made her own mush, sliced about ¼ inch thick then fried slow in bacon grease until real crispy. Her and my sisters liked butter & maple syrup on it but I usually just had butter, salt, & pepper.

Maple syrup would be good on the mush & sausage balls or the cornbread ones. Another good choice would be a good honey BBQ sauce. I especially liked the horseradish sauce for the kraut balls. My favorite of the 3 I would say was the Jiffy cornbread ones. 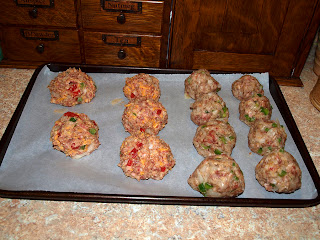 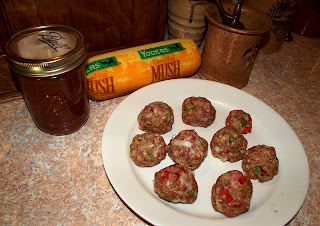 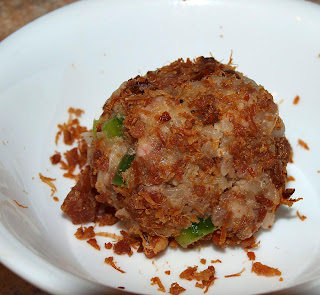 This shows how I did the mush 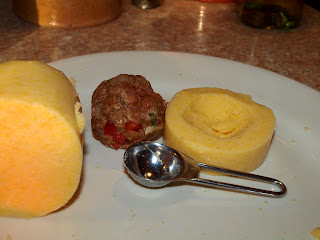 After one hour on smoke 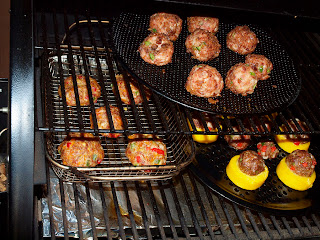 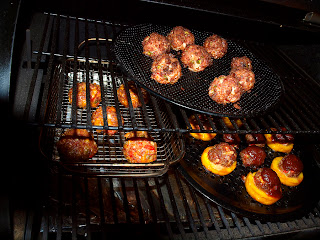 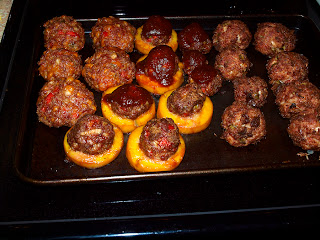 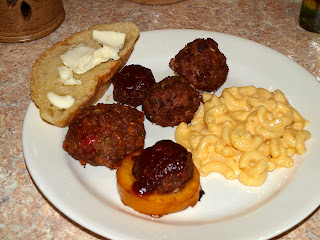 Smokin Don
Posted by Smokin Don at 9:24 AM