Wednesday night is pizza night for us most weeks. The Beer & Wine Depot has their pizzas on special and they make the best pizza’s in Wapakoneta, Ohio. I didn’t have anything else going on today so I decided to make something for dessert. I do a lot of cooking but desserts are not my thing, this is easy though, just mix and put in a dish & bake. I can do that! Besides I made up this recipe & kinda proud of that.

I wanted to experiment with my original recipe. I decided to do with a pie crust instead of the Bisquick topping and would also double up on the cream cheese mix. I used a store bought pie crust & cut it in 1 ½ inch strips to use on the top with some space in between.
I baked it & turned out great, I will add a printable recipe.

Supper time my wife ordered our usual, 14 inch with, sausage, bacon, peppers, & onions. Now we don’t eat that whole thing, my wife freezes what’s left for nights I don’t cook. She eats it, I don’t like warmed up pizza. She made a couple small salads & then went to pick up the pizza when it was ready. She goes to get it since it’s her turn to cook!

We got our salads & pizza on a tray & retired to the living room to watch TV. My dog Mag usually lays in his bed while we eat but he knows he gets a few bites of pizza on pizza night so he waited by my chair for his bites. He also knows shortly after I am done eating we have our 4 Nutter Butters or pecan sandies and he gets a small bite of each one. Not too long after I put my tray away he stood there with that where are my cookies stare!

After those cookies I had to wait an hour before I had my peach cobbler & ice cream. I liked my experiment & would say this is for those that don’t like all the crust most cobblers have. It has a lot of good gooey peach & cream cheese going on. You could add a bottom crust if you want & if you really like the crust do my one with the Bisquick topping.

The peach mix in the dish 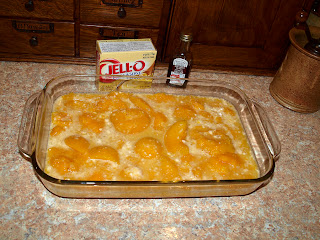 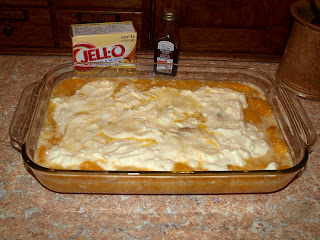 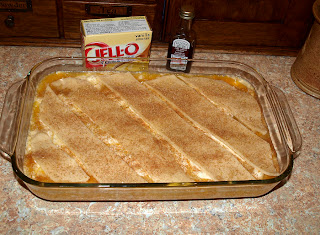 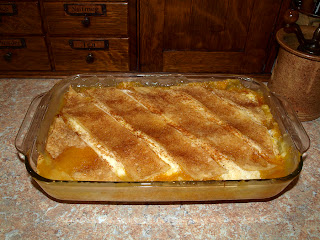 My after supper dessert 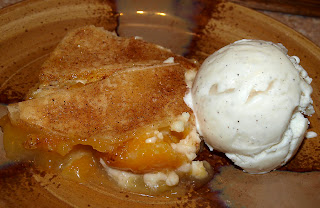