For last night’s supper I did wings. I found this recipe at Saveur.com and knew from the mix of seasonings they had to be good. I bought about 3 lbs of wings, mixed my seasoning, & coated the wings and in the fridge for about 5 hours. I left out the cayenne pepper since my wife does not like hot. I figured I would get enough heat from the sauce mix that I would add to mine. I only did half the hot sauce, butter mix since I wasn’t doing my wife’s wings.

I was having sweet potatoes with mine & the wife was having some of my leftover potato cauliflower mash & cornbread with hers. I cut a sweet potato in half, butter & brown sugar over & wrapped in foil.

My wife & I both loved these wings. I thought they were the best or among the best wings I ever had. The recipe called for the wings tossed in the sauce before serving & I didn’t do that. After eating 5 of them I had enough of the sauce left to dip one in & try. It was good & I would probably prefer adding the cayenne in the seasoning & doing the second toss in the sauce when I do them again. This is definitely a keeper recipe. 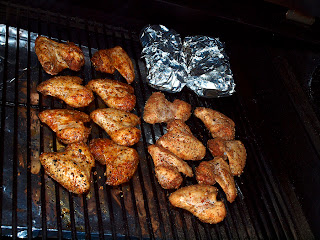 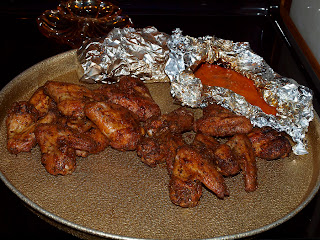 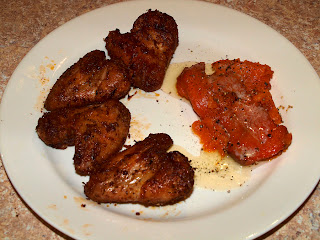