Tonight we had Italian beef sandwiches, one of my favorites, but then I have a lot of favorites! I did some awhile back using chuck, a large English roast. I did it as I would do pulled pork. I did it seasoned, folded & tied, on the smoker grate until 165 deg then placed it in a foil pan with onions, peppers & beef broth. I then covered w/foil & took to 190 deg. I pulled it & for the sandwiches I served the reserved au jus for dipping.

I thought I probably wasted a lot of good flavor by doing it on the grate first, so this one I did on a rack set over a foil pan to catch the drippings from the start.

I had bought some of Louie’s Italian Beef seasoning packs to try on this one. You mix it with 6 cups of water and say for 3 lbs of beef. I had bought two English cut chuck roasts, each a little over 2 lbs., certified Angus. They were pretty lean. I seasoned one up with, salt, pepper, onion, garlic, oregano & some pepperoncini peppers. I placed the other roast on top, tied, & seasoned. I wrapped it in saran wrap & in the fridge over night.

I pulled it & wrapped in foil to let cool. I poured the au jus in a bowl & all in the fridge when the meat had cooled. I enjoyed the beans & cornbread and would worry about the beef for tomorrow’s supper.

I woke up to blowing snow, so I was glad I had the beef cooked. After lunch I untied & sliced it, I had 3 ½ lbs of meat. I planned to do in my Crockpot. I skimmed the fat from the reserved au jus. I had 2 cups so I mixed 4 cups of water with the rest of Louie’s seasoning & poured all into a sauce pan to heat up. I placed the beef in the Crockpot, some sliced onion, red & green pepper. I poured the boiling au jus over it & turned on high.

In 2 ½ hours my Chicago style Italian beef was ready. I served the wife & me; a generous portion of beef, some peppers & onions on a hoagie roll and ladled au jus over it. I served some oven baked sweet potato fries along with it. It was delicious, I was glad the meat was tender & with Louie’s seasoning about as close to an authentic Chicago Italian beef sandwich as you will get. 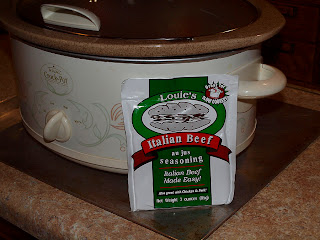 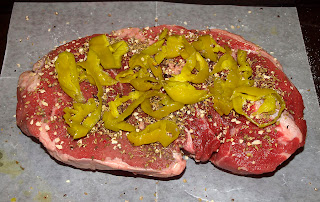 Another Roast on top, tied & seasoned 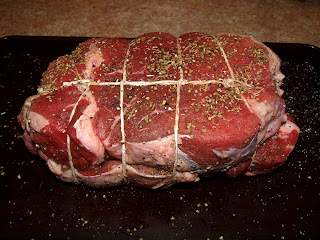 On the smoker & ready to foil 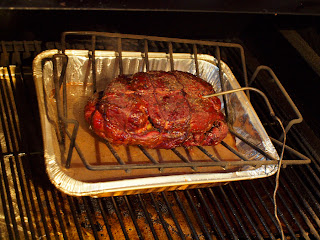 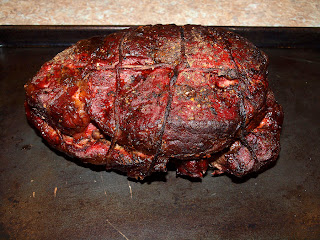 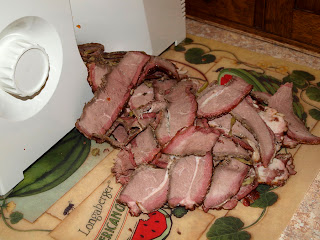 This shows the Smoke Ring 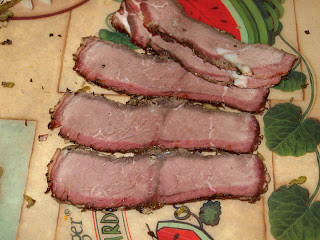 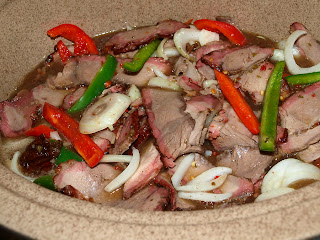 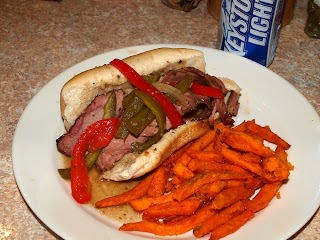 Smokin Don
Posted by Smokin Don at 4:23 AM