A recipe for baked egg, onions, mushrooms, & sharp cheddar caught my eye over on Pam’s site. For The Love of Cooking. This morning I woke up to blowing snow and had to sweep it in front of the door to let the dog out. A good day to stay in & fix the egg bake for an early brunch for the wife & I.

It was a good chance to use my new carbon steel skillet too. I remember my Mother using one & I have been wanting to try one. They were hard to find & expensive, mostly at outdoor cooking supplies. Now I found a lot of choices at Amazon & I settled for one of the cheaper ones from World Cuisine, a 10 inch one. It’s a purdy thing with a speckled handle. I washed it then seasoned it. My first cook was bacon, eggs, & mush. The bacon stuck a little but the eggs & mush did great. My next cook was fried potatoes, they always seem to stick for me, no sticking at all & got a nice brown on them. Easy to clean too, I used a scotch pad on it & re-seasoned it with a light coat of cooking spray, on a burner set at high until it starts to smoke then set off & ready to go again. I like the fact I can use metal utensils in it.

I sautéed the onions & mushrooms until browning some, added the ham then assembled in a ramekin. I baked for 5 min then under the broiler to set up the egg whites. I made one for my wife then did one for me, a larger one & did all in the skillet. We had some Arnolds flat bread toast with it. Tasted pretty darn good, Thanks Pam for the recipe!

Woke up to this today! 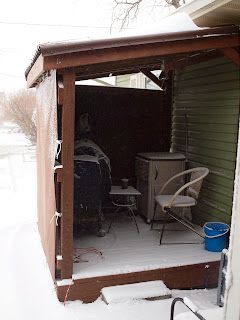 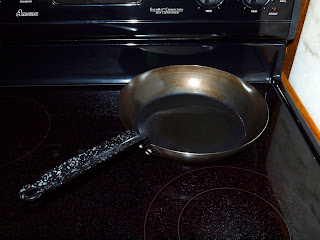 My wife's dish, not as purdy as Pam's was 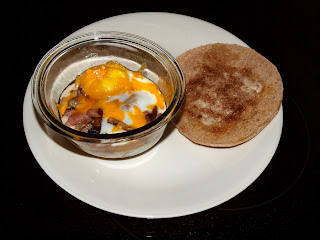 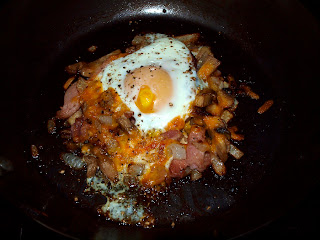