A good use for left over ham or pork bones & any pork is to make a pot of beans with it. I had a bone froze up from a Pernil Asada fresh picnic shoulder I made awhile back. I bought a package of spiral cut ham ends & pieces to add too.

I was busy today, I got 4 lbs of English cut chuck roast on smoking at 9:30. It’s wrapped & in the fridge. I will slice it tomorrow & add it to some Louie’s Italian beef seasoned broth, green peppers & onions for Italian beef sandwiches. I had soaked a lb. of great northern beans overnight for the ham & beans. I followed Mary’s recipe for Cajun white beans & rice on Deep South Dish. I basically do ham & beans about the same with the exception of adding chopped green pepper & Cajun seasoning. I think that takes it up a notch for some good eating.

At noon I covered my pork bone with water, some salt & pepper; brought to a boil & simmered about 2 hours. I removed it to cool & sautéed some of the ham, about 1 ½ cups, added it to the soup pot. I sautéed some diced pepper, onion, & celery; added it to the pot. I used my new carbon steel skillet & think I will really like it. I removed the meat from the bone & chopped, about 3 cups, then added that to the pot. I rinsed the beans & added them to the pot. Threw in about a teaspoon of Cajun seasoning.
Brought it to a boil then on low to cook couple of hours.

I mixed up some Miracle Maize cornbread & did it in a cast iron skillet. When the beans were done I covered & turned to lowest setting until supper time at 5:30.

I cut me a piece of cornbread, sliced in half, pork & beans over it and some chopped onions & Cholula hot sauce. Some of the best beans I’ve had in awhile, so good I had seconds. After I took the photo I added some of the good broth! My wife doesn’t know what is good, she had a Stouffers frozen soup & sandwich. 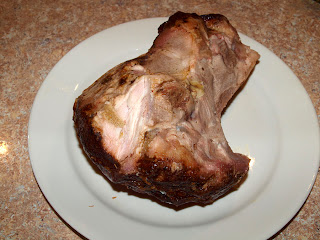 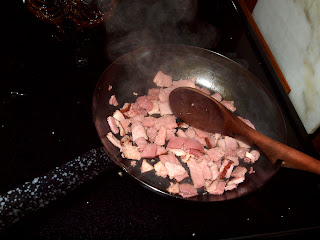 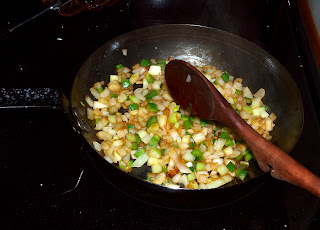 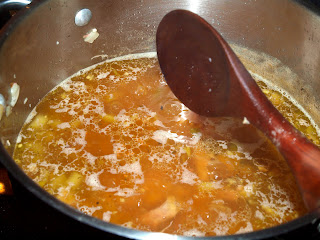 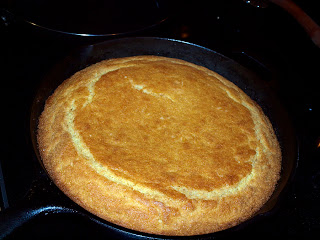 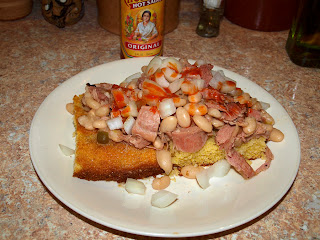 Smokin Don
Posted by Smokin Don at 1:05 AM