I decided to do my muffin pan chicken stacks. I got the idea from BBQ competitor, Myron Mixon, who did thighs in one. For mine I would use a slice of bacon, a piece of boneless skinless breast, some BBQ sauce, a slice of sweet onion, a slice of red pepper, more sauce, another piece of breast & fold the bacon over secured with tooth picks. I would cook them for a period in the pan then when they were set, place them on the grill to finish. My first ones turned out great. I had drilled holes in each muffin pan for the fat to drain but a pellethead friend said he did some without the holes & the fat would drain when finishing on the grill. I would do my second ones in a muffin pan without holes.

For these I would use my Peach Chipotle BBQ sauce, mild heat. My wife did not like the heat so I had to cook a batch for her without the heat & could take Mom one. I wanted to use fresh peaches but they are not in season so would use pears.

I put a thin pat of butter in each pan. A slice of bacon for each. This was the worst bacon I have seen, Hormel lower sodium. It looked like it was never cured but didn’t have time to get different. I didn’t think they would hold together but came out good. I did a slice of BSC breasts on the bacon, a little Cajun seasoning on mine, some Peach sauce, a slice of sweet onion, a slice of pear, more peach sauce, a piece of BSC thighs, then folded the bacon over. I used 3 toothpicks in mine & 2 in the others.

I served them up & we reheated the fennel, quinoa salad. It tasted good the second time around. The chicken was moist & tender; the pear was good with it but still want to do peaches. I liked the breast & thighs together and thought the chicken was more moist than my first ones. I think I still prefer the onion & red pepper for best flavor pairing. 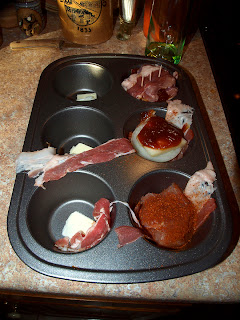 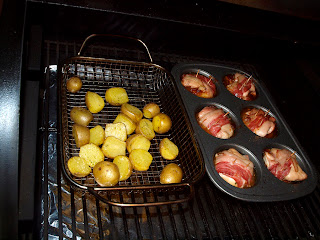 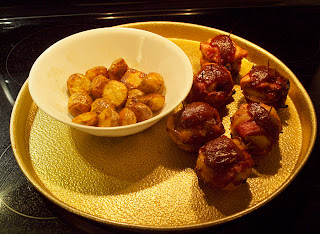 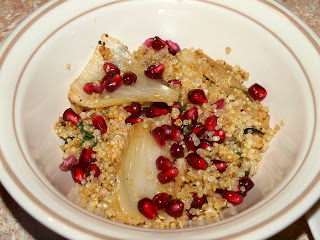 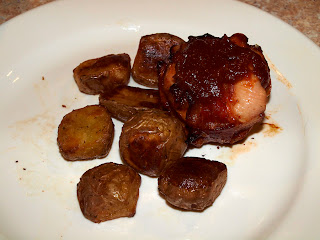 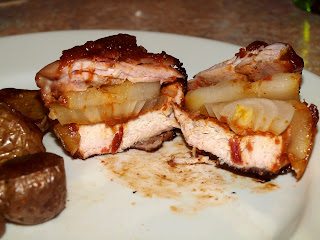 Smokin Don
Posted by Smokin Don at 9:19 AM