Nothing spectacular here but the end product tasted good! I was hungry for a chili dog; the wife, daughter, daughter in law and her Mother went to Grand Rapids MI for lunch and some shopping.

I went early to my butcher and got some of his old fashioned hot dogs and a pound of ground chuck. I planned to use my focaccia bread for the buns. I did not expect the wife to get home until late but she called at 5:00 and said they would be here about 6:00. I thought I had a break but now I had to feed her too!

I discovered instead of McCormick’s Chili Sauce I had their Skillet Sloppy Joe sauce so now I was having Sloppy Joe dogs! At 5:30 I got the ground chuck on to brown up. When I was pretty brown I added some chopped onions and cooked until the onions were getting soft. I drained some of the grease off then cooked a few minutes adding some chili powder and then some beer to deglaze the pan. I added the Sloppy Joe sauce and turned to simmer until I made cooked the hot dogs.

My wife got home at 6:00 so I fired up my Weber Spirit to 400 deg. with my grill grates, the back side. I had a tomato that I had picked green and it was about half ripe so I sliced it and added some Penzey’s Sandwich sprinkle. I cut what I thought was hot dog bun size pieces from the focaccia bread and cut part way through. I sprayed the cut sides with some olive oil.

I put the hot dogs on and did them about 4 minutes per side, the tomatoes went on for a few minutes turning and I toasted the bread a minute or two on each side. The hot dogs were bursting and that’s the way I like them. I took all inside to serve. No pics from the grill just too much for me.

My wife had the sloppy joe sauce and shredded cheddar on hers, I had some mustard, sloppy Joe sauce and chopped onions on mine. We both liked them but they were a knife and fork sandwich!

For the sloppy Joe sauce 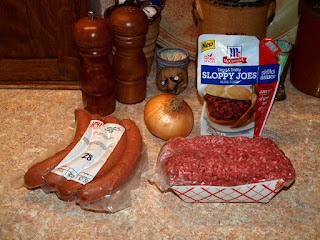 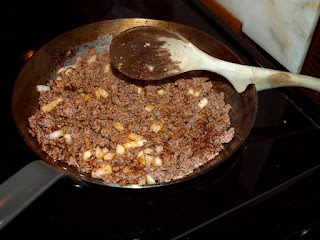 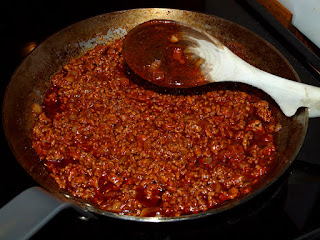 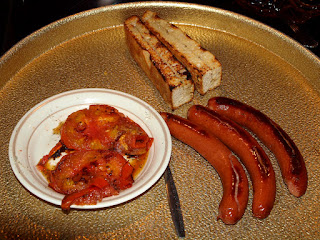 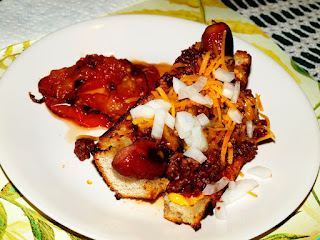