The 4th of July has never been a big cook holiday for us. For about 40 years now we have went to the St. Joseph 4th of July picnic. Most years we would get lemonade shake ups, fair fries with salt & vinegar and whole hog sandwiches. The pork burgers are fried on a flat iron griddle. I liked to drink beer and play showdown poker; the wife and kids played bingo then we watched the fireworks at 11 PM. They always have a great show. Since my back operation it’s too much walking for me.

My butcher had a leg of goat ready for me Fri. so I planned to smoke the goat leg Sunday. After getting some advice from LTBBQ forum Kevin (Stalag) and Cliff (TentHunteR) I knew about how I was going to do my first time cooking goat.  I had the butcher saw the shank off so it would fit in a pan for some braising.

I seasoned it with kosher salt, a little cumin, white pepper, fresh ground black pepper and garlic flakes. It went in a plastic bag and in the fridge at midnight. After I got it in I remembered I didn’t rub it with olive oil like I wanted to.

I got up early this morning and sprayed it with some olive oil and added some more black pepper and garlic flakes. I smoked it for 3 hours at about 200 deg. grill level. I then took it inside and placed in a foil pan. I added carrots, 3 sticks of celery sliced 1 inch and cut up 2 Vidalia onions. I placed 4 sprigs of fresh thyme and 3 sprigs of fresh rosemary on the roast and a few more on the veggies. I poured 1 ¾ cup of Yellow Tail cabernet sauvignon over the roast.

I had some flat bread and Greek yogurt for making goat gyros; and I sliced up some cucumber. I steamed some baby Dutch yellow potatoes and added butter and parsley. I shredded up the goat some for everyone to make their gyros. It was fall apart tender. We had the carrots celery & onions with it on the side.

We all liked the goat meat. Next time I would cut it up some; it is very stringy and doesn’t bite through like stringy beef. The veggies had too much thyme and rosemary on for the wife and daughter. The next time I would just put it on the roast.

I didn’t note any strong smell before cooking. Since I did it outside didn’t note any smell; I might have if I did it inside. I didn’t think the taste was that much different than beef. I would definitely do this again but at $10 a pound not that often!

All ready for the smoker 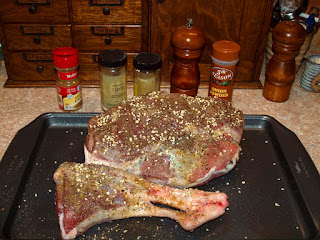 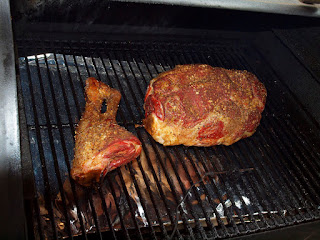 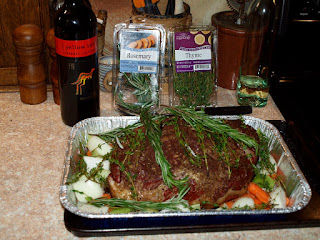 Smoked shank I will freeze for later 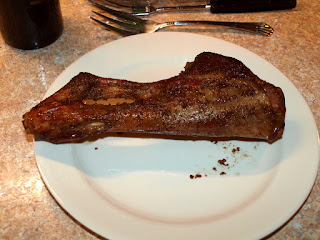 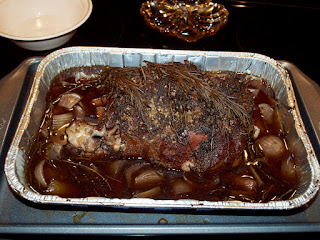 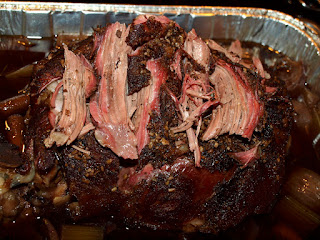 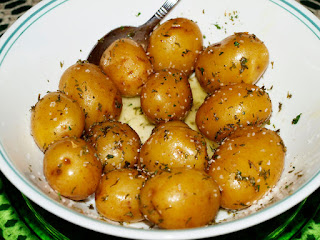 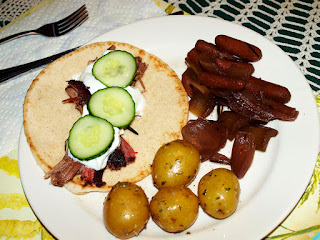 Email ThisBlogThis!Share to TwitterShare to FacebookShare to Pinterest
Labels: Goat