I decided a cold sandwich and pasta salad would be great for a hot day. It hit 91 here today. I got the pasta salad recipe from a friend at work and made it often but lost the recipe somehow. I remembered it I think! I used to use Durkee’s Salad Seasoning but can’t find it so I used Mc Cormick’s Super Salad seasoning, looks about the same ingredients as Durkee’s.

Some good Italian Salad Dressing,
I used Ken’s Steak House Northern Italian style. I had a little less than a pound of pasta so used about ¾ of the bottle. I just drain the pasta and let cool in the colander; drizzle a little olive oil over and mix so it doesn’t stick together. While it’s cooling I cut up the peppers and cukes then mix all together. I think mixing while the pasta is a little warm lets it take on more flavor. Let the salad set in the fridge several hours before serving. It holds up well for a few days.

My sandwich was some Maille Dijon Mustard, some Margherita Brand salami, Kah’s smoked ham and a slice of Swiss cheese on a Cheap White Bun. All tasted pretty good. 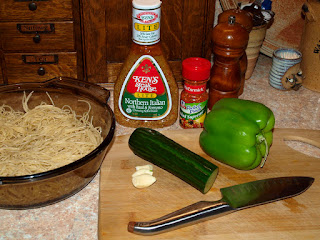 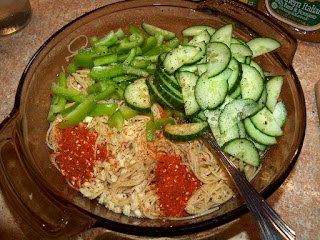 Mixed and ready to chill 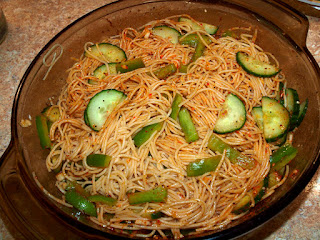 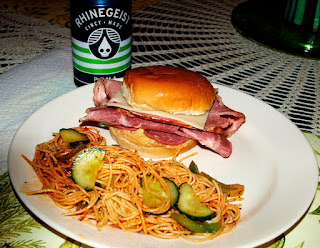