Shrimp & Sausage Kabobs and Corn on the Cob

I got my sampler pack of 4 jars from Big Dick’s the other day. I used the Big Kahuna and the Margarita on the kabobs. I had seen someone curls shrimp around a slice of smoked sausage I wanted to try. I had some Key West Jumbo shrimp and a link of my butcher’s smoked sausage. Even though his sausage is fully cooked I gave it an hour of smoke on my Traeger and it was 160 deg. IT

I decided to do the kabobs on my Weber JJ. I had to clean it up a little. I only used it twice last year so it needed used. My Lodge Hibachi was handy to start my charcoal in. I had some leftover in the two Weber baskets and shoved them to on side. I added a small foil pan for an indirect area.

I had some fresh corn and a yellow zucchini from Sutter’s farm. This was my first fresh corn of the year. I had a half dozen ears; I cleaned off about 3 of the outer husks and trimmed both ends. I steamed them about 6 minutes using a blue enamel steam pot on my Camp Chef gas burner.

I peeled and deveined the shrimp; sliced the sausage and had enough for 8 kabobs. The jumbo shrimp was not big enough to go around the sausage and skewer it so they were just staggered. I was glad the grandson was coming to eat with us. I used the Big Kahuna on 5 skewers and the Margarita on 3 for me.
Tasting out of the jar it was a little hot.

I had the Weber heated to about 440 deg. and the corn water on. I added some sliced zucchini coated with a little olive oil and Penzey’s Sandwich Sprinkle over the coals to get marked. I turned them after 4 minutes and added the corn to the steaming pot. After another 3 minutes I moved the zucchini over the foil pan and added 5 of the kabobs with the Kahuna; I did them 3 minutes per side. I took all inside with two ears of corn and got the wife and grandson served then did the 3 kabobs for me.

All tasted pretty good! The Margarita rub was not as hot as I thought but had a nice bite to it. The wife and grandson liked the Big Kahuna. I was afraid the Sutter’s corn would not be up to par, they had bigger kernels than their usual.  It was just as tender and sweet as always. Their corn is twice what you pay at the grocery but sure worth it. 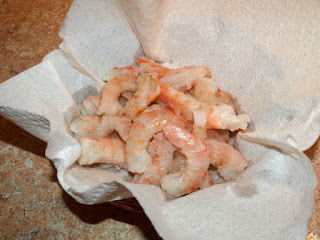 Kabobs made and seasoned 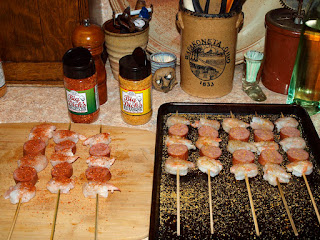 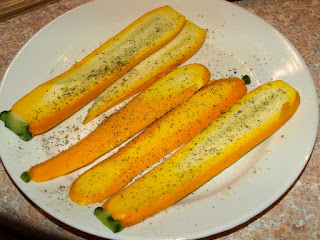 Getting the charcoal started 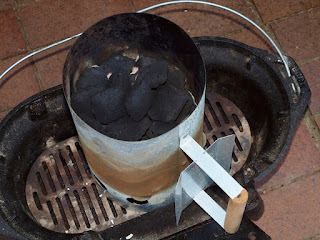 Kabobs on the grill 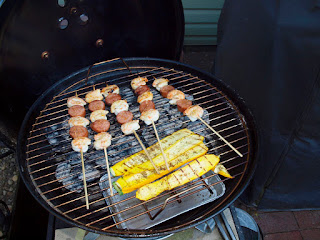 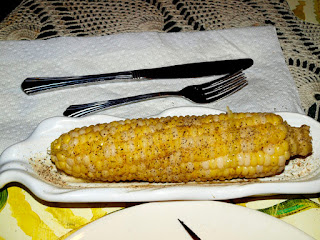 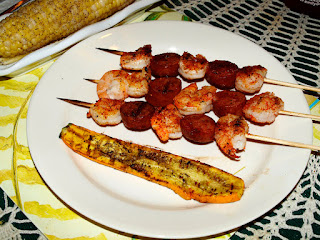